I love the thrill of reviewing new Arc’teryx stuff. Not just because it’s so well made, but rather because I know I’ll be surprised again by all the innovations and details - and indeed they deliver with the Bora AR 50 pack. I tested it for more than 3 months, in highland backcountry, rocky alpine-style mountains and forest covered hills. So let me tell you my Bora AR 50 story...

This pack will appeal to most hikers and mountaineers looking for a 3-5 day pack (or extended daypack).

The styling of this pack doesn't make it particularly well suited to military and tactical style geeks. Additionally hikers on a budget or ultralight hikers should look elsewhere. One quick look at the Arc’teryx Bora AR 50 tells everything: it’s the epitome of modern technical mountaineering packs. Slick design, great materials, alpine pedigree…what’s not to like? Okay, maybe the color scheme could be a little bit more extensive as it’s available now in blue and...only in blue. But you better like blue because after a couple of months with it on my back I can tell you only one thing: the Bora AR 50 rocks big time! And if there is such a thing as a ‘sexy alpine pack’ then the Bora AR 50 could be a definition of that term, just take a look: The pack is built around a classic system, so it’s just an alpine-style internal frame top-loader, right? Well, technically that is true, but Arc’teryx took it to a whole new level and that ‘frame’ is in fact quite a complex laminated construction of nylon fabric and thermoformed composite with carbon-fiber-like structure. But you can still adjust it to your body shape with internal aluminum stays, which create the backbone of the Bora pack. No doubt it’s the most hi-tech back panel I’ve ever seen on a pack (and I’ve seen quite a few). It looks like it's built with stealth technology taken directly from the aircraft industry. The anatomically pre-formed waist belt uses exactly the same composite. It’s heavily padded with a high-density foam, and all that together sets the load-bearing capability and carry comfort way above standard. Of course the most innovative element in the Bora line is how that waist belt interacts via a pivoting system with the pack itself and with a hiker. I’ll explain it in detail later on. An important note - the waist belt is non-reversible, but it’s fairly easy to detach it from the pack for storage (no tools required). The shoulder straps are pre-shaped and nicely padded as well. Plus easily adjustable for torso length and shoulder width via a smart GridLock system, the re-adjusting of which is just a matter of seconds. With all these features the Bora AR 50 wouldn’t be an ultralight hiker’s dream but at just over 2 kg for a 50L pack with so many features and such a robust construction it's not bad either. The blue outer material is some sort of laminated/coated ripstop Cordura nylon, which looks and acts almost like armor against the elements. It’s stiff, robust, and weatherproof. All seams are laminated on the back with waterproof tape of course. The lower section (black) is more standard non-laminated Cordura nylon but it’s multilayered and padded on the bottom to ensure durability against rock, bush, sand etc. The side pockets are made of stretchy nylon, also layered for added strength. All other materials and hardware used are up to Arc’teryx’s highest standards. There is a total of 5 zippers in the Bora pack. An internal document pocket and secret pocket under the lid both use standard high-quality zippers. A heavy-duty zipper closes the top lid and another long one (side opening) is hidden behind nylon tape. And finally the front one, running boldly along the big waterproof pocket – this one is the famous patented WaterTight zipper – really stands out and I can’t imagine this one could ever fail - it’s a zipper beast! And to make it even stronger it’s backed up with a tough snap at the top. All in all, the materials and hardware on the Bora are topnotch. But honestly, what else should one expect on a $500 pack? At first glance it looks really ascetic and minimalistic on the outside. However, that’s not really the case as the Bora is actually loaded with features. There are two external bottle pockets (each easily holds a 1L Nalgene), a huge waterproof zipper pocket, an adjustable and detachable top lid with two pockets, two rows of daisy chain, ice tool loops, and a pair of compression straps on each side, plus a hidden full-length side opening. Oh, and it’s fully compatible with most hydration systems. And it’s all ‘organically’ built into the pack, so the overall appearance is really smooth and clean.

"All in all, the materials and hardware on the Bora are topnotch. But honestly, what else should one expect on a $500 pack?" The main compartment is essentially a spacious sack with a small internal pocket for personal items, and a separate sleeve for a hydration system (my choice was a military-grade 3L Source bladder with insulated tubing). The closure is just a drawstring with toggle and additional strap with Fastex buckle. It can also be extended by about 5L if you need to overstuff your pack BUT it won’t be fully weatherproof anymore. As I mentioned there is also a hidden full-length zipper on the side of the Bora so any part of the pack (down to the very bottom) can be quickly accessed without unloading it. Very handy, especially on a cold rainy day. The front weatherproof zipper pocket is flat but easily holds a lightweight insulation layer and packable hardshell, in my case the Arc’teryx Atom LT and LEAF Alpha LT. Instant access guaranteed. And there was still some space for a map in there. The lid is surprisingly spacious; I was able to store a Gamma LT softshell, snacks, headlamp and a compact camera - all of that together. The bottom secret pocket is useful for a wallet and car keys - well hidden but easily accessible. The lid can be adjusted up and down, so you can put climbing rope or even another small pack underneath (the Arc’teryx Alpha FL 30 in my case). Or it can be completely removed. Side compression straps, daisy chains and ice tool straps complete the package. The side pockets I’ve already mentioned. In a nutshell, the Bora’s organization capability is way above initial expectation. Now this is where the new Bora shines! And I really mean that - it’s the most comfortable full-size pack I’ve ever had on my back, bar none. Thanks to the unique RotoGlide system, the harness actively transfers the pack’s weight on the hips and shoulders. Depending on the activity the shoulders-to-hips weight bearing ratio can differ with each step and it adjusts to body position. When hiking in easy terrain most of the weight sits on the hips. But when scrambling through rocky obstacles the RotoGlide not only pivots to the sides, but also moves along the vertical axis (roughly an inch and a half) and ‘actively’ transfers weight from the hips to the shoulders or vice versa. And while the Bora's waist belt moves versus the pack’s frame it still stays bonded to the hips and supports the iliac crest all the time. That is a common issue on ‘fixed’ belts, where the waist belt moves up and down and disconnects from the hips all the time. It’s not a big deal on the small daypacks, and also huge expedition packs are more forgiving as they’re used just to haul heavy cargo to the base camp and not to scramble through rocks. However, a mid-size ruck like the Bora can be comfortably used for both: to haul heavy cargo to a hut or local camp (in an overstuffed mode) and as a daypack or summit pack on the other days. And last but not least there is a clear ventilation gap between the back and the pack - and even though it’s not possible to avoid enhanced perspiration with 70lbs on the shoulders, the ventilation is actually quite good.

"It’s the most comfortable full-size pack I’ve ever had on my back, bar none. Thanks to the unique RotoGlide system, the harness actively transfers the pack’s weight on the hips and shoulders."

Just for reference I’m roughly 6’1 and 185 lbs and the heaviest load carried in my pack on the approach to a mountain hut was dangerously close to 80 lbs (including another stuffed daypack under the lid) so I really can say something about this pack’s wearability. And once you experience an advanced harness system like the Arc’teryx Bora AR, it could be REALLY hard to get back to standard suspension. Okay, this is very easy - you can forget about a rain cover or drybags inside. That blue laminated outer material and the sealed seams totally shed rain, mud and snow. This year we’ve had quite a cold and rainy summer and early fall in central Europe, and I’ve used my pack during multiple rainy days and didn’t experience any moisture inside, and I mean ANY. Just make sure the lid stays tight and seals the main compartment well. It’s easily the most weather-resistant alpine pack of such size I’ve ever seen. Actually it’s the second biggest selling point of the new Bora line of packs if you ask me. The first one is the harness/suspension system of course. 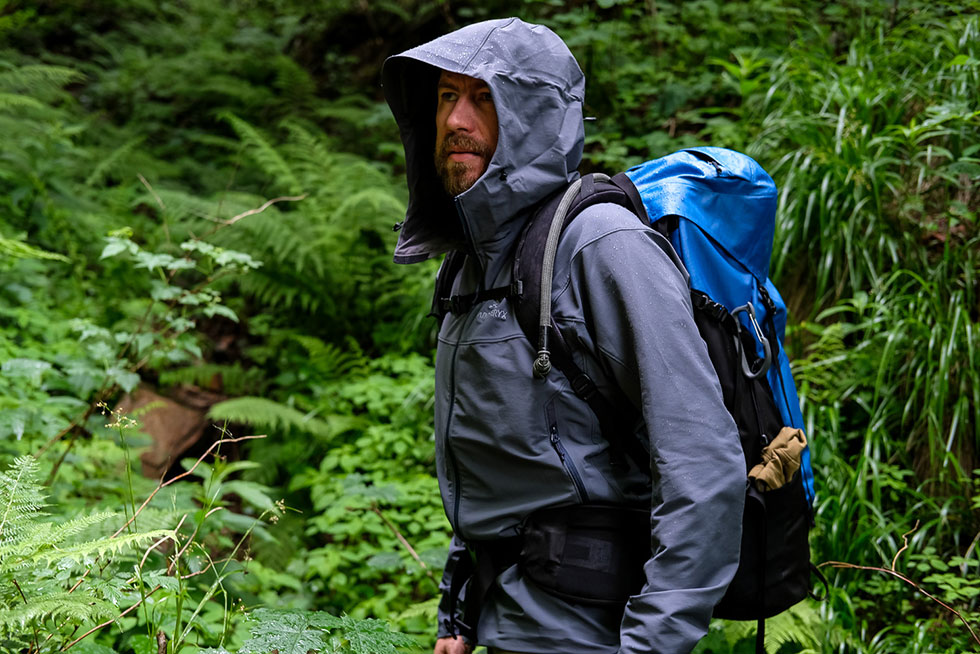 You’d be hard pressed to find a direct equivalent of the Arc’teryx Bora AR 50. In a way (and at a considerably lower price) it could be either the Osprey Atmos AG 50 or Gregory Alpinisto 50 - both top-tier mountaineering packs but not exactly a direct alternative. Arc’teryx made a very unique pack and set the bar very high.

"It’s easily the most weather-resistant alpine pack of such size I’ve ever seen." - Price (ouch!)
- Non-reversible waist belt, needs to be detached for storage
- Available only in blue It’d be really hard not to like the Arc’teryx Bora AR 50. It’s got the looks, performance, top materials and immaculate craftsmanship. Sure, it’s also seriously expensive, but what you get is arguably the best 50L multi-mission alpine pack available today, at least in my opinion. Still, at a price tag close to $500 it’s not an easy decision at all and I know that.