AER x Carryology: the Secret Balance of the Tokai

We’ve been playing a long game of cat and mouse with this collab.

From the day they released their very first bags on Kickstarter, we've been fans of the San Francisco-based Aer. There simply aren't very many brands on earth that balance daily functionality with clean minimal aesthetics, like these folks. That complementary dualism and contrast still fascinates us today.

And their carry has been long-time favorites of our readers, earning Aer a slew of Carry Awards wins across the board.

So Aer was a brand at the top of our 'dream list', and when the project was greenlighted, boy was it a moment. It felt like we were floating on… well, you get it. And we were amped to hit the design table with Allen Choi, the founder and master designer behind it all. 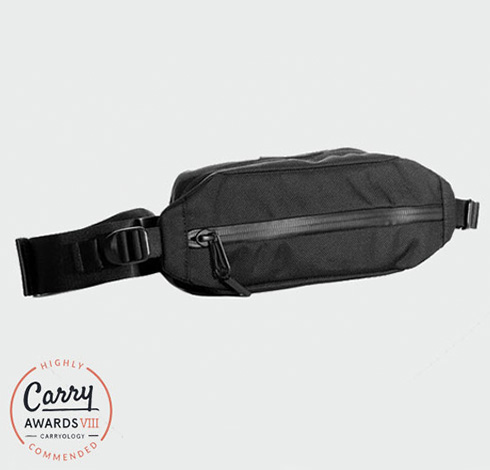 The Year of the Sling Continues...

2020 has been a weird one for all of us. And our methods of carrying have evolved to deal with the madness, with most of us carrying less and transiting in shorter bursts. So Collab X would be a sling from the very beginning.

Yes, AER has two different slings to choose from: the Day and the City. But we had our answer. The City Sling was the compact choice, with a cleaner stealthier silhouette. Originating from the Japan-exclusive collaboration with Oshman’s Sporting Goods, and then sprouting into the US market (thanks to unwavering demand) later, it had that street vibe we wanted to play with.

Factor in that the City Sling was a Carry Awards top 3 award winner this year, and there was no question. We started gathering our favorite fabrics, hardware bits, and wiped the slate clean. No holding back. From City to Streetwear

Like the name suggests, the City Sling is designed for the city dwellers, the urban travelers, the commuters, humans peacefully skating through cathedrals of glass and concrete. We began focusing on this vibe. Mix this with AER's continuing growth and success in Japan... we thought... ok... let’s take this to a Japanese city. Tokyo. The bustling streets of Harajuku. The balance of modern/history, loud/quiet, calm/rush, black/white, rugged/elegant, patterns/solids, yin/yang.

It would be inspired by all of these, and give a nod to Japanese streetwear. A culture that continues to inspire us here at Carryology HQ. We began our experiments with the outer fabric. We had originally discussed the options of Dyneema and other exotic fabrics. But we kept returning to Dimension Polyant XPac, as Carryology and AER are both fans of the strong, waterproof, and durable laminated fabric. But, this was an ode to the city. It had to have its ruggedness tuned way up. So we couldn't just go with any old XPac... we went with X50. For extreme durability and that airy reduction in weight.

The original plan was to make the entire Tokai Sling from X50 MultiCam Black...or blend camos for a real statement piece, but that was just too loud. Again, we looked back to our inspiration... the balance of subtle and style. So we pulled back and opted to put an all black front face on the sling, with MCB wrapped around the top, bottom, sides, and back. Onlookers see stealth black, while you see the MCB when you sling it around to your chest. Like we said, X50 was available in a variety of different MultiCam patterns. And we loved the idea of the loud style details being visible to the user, when they wanted to see it. Discreet meets flashy. For the early prototypes, the front compartment was lined with the original MultiCam pattern in X50 XPac. It wasn't until the very last round that we thought... yin vs yang.

What is the equal opposite of MultiCam Black?

So out went the original MultiCam, which was replaced with MultiCam Alpine. Of course, in X50 XPac.

While we were in there already... we decided to pimp out the key lanyard, with a Korean-made magnetic "Magic Short" key lanyard with metal keyring. Stronger, more functional and little more badass. If you’ve been following what we do, you know we love the technical goodness and weatherability of Hypalon (the stuff used in Navy SEAL inflatable boats). Its matte black looks would work in tandem with the black X50 for a super clean face, and give some variation to the handfeel. And while we were at it, we added a zipper garage in Hypalon too, for that extra notch of weatherproofness.

Not that there is anything wrong with the City Sling's UTX-Duraflex hardware on the sides (for cinching down the load), but... you know us by now. We swapped out the plastic for an all-aluminum Alutica tilt-head tension lock hardware, anodized in black. Fun fact: they have a break strength of 800+ lbs, just in case you somehow carry 1,600+ lbs in you sling. Magnets. But how do they work? We'll never know. Fortunately, the geniuses at Fidlock figured that whole "thing" out for us all. And our love for magnets and Fidlock led us to an important design decision, that ended up for a two for one benefit. A Fidlock 40mm V-Buckle was selected because it's a dream to use, it's super strong (70kg break strength), and it only requires one hand to buckle or unbuckle. The added perk? It's 40mm width. So we swapped the existing webbing on the City Sling and opted for a (in our opinion) better suited 38mm nylon strap webbing for the Tokai. Bonus.

The triple secret bonus? The shield on the Fidlock V-Buckle is stainless steel, coated black... acting as perfect canvas to laser engrave our two logos onto.

And the zipper pullers? We had played around with orange Dyneema cord, but it just didn't feel substantial enough. Allen told us that AER had secretly been working on a new zipper puller design, that was burly as all heck and helped reduce ‘click’, and that the Tokai Sling could be the very first to use it. A quick change to orange paracord and it was a done deal. Aer and Carryology are both big believers in high-vis internal lining fabrics. And our signature is that high-vis orange pop. We continue to use this colorway, because based on our legit scientific research (I'm honestly not kidding – I had help from NASA engineers and neuro-opthamologists over the span on months when I went down this rabbit hole... I'll have to share sometime). Form following function. So we were happy leaving this bright and bold interior fabric as is, but Allen told us he had found some really nice 210D nylon ripstop in bright orange, which would add just a touch more durability and visual difference between the City Sling and the Tokai Sling. It made total sense! The Tokai Sling was Ready... or Was It?

Together, we built our dream sling: the AER x Carryology Tokai Sling, based off the legendary AER City Sling. After months and months and dozens of prototypes, we were finished. Michael (based in Melbourne, Australia), Allen (based in San Francisco, California), and myself (based in Austin, Texas) all agreed to hop into our final video call to slap the table and officially send these Tokai Slings off to be made (by the way, you'll see the standard Aer "designed in San Francisco" flight tag replaced with one representing all three cities). We were happy, excited, and finally knew we were at a stopping point before we went too far and screwed something up. To this day, I'm not sure who had the idea... but one of us was holding up the Tokai Sling prototype to their laptop camera, musing how much we all loved the X50 MultiCam Alpine front pocket contrasting against the X50 Black and X50 MultiCam Black fabrics...

"Wait a second! Hold on… We Need Balance…"

Balance, dualism, negative/positive, contrast, opposites. It's yin AND yang. It's not yin OR yang. Then the 'What if' came ... what if we make the Tokai Sling's equal opposite? We'd bring the light from the inside, to the outside. And bring the darkness on the outside, to the inside. Two versions of the Tokai Sling... a stealth black and MultiCam Black version and a bright white and MultiCam Alpine version. Perfectly balanced, as all things should be. Well... except for the quantities.

As always, our readers will have exclusive first dibs, 24hrs before the public. After that, the Tokai will be revealed across all of the internet and the world for all to secure. So if you'd like to hit the streets with this, act quickly.

Mark your calendars and get ready for the big reveal.

The link to purchase will be in the Exclusive Release article here on the Carryology website which will be posted at the time/date listed.

It will also be sent out to newsletter subscribers. For speed, we recommend you come to the website to find the article and the link, otherwise it may already be sold out by the time you find it in your inbox.