In the world of maximizing your carry-on, personality is hard to come by. Black and square dominates, which can leave you feeling like just another one of the sheep being herded.

Timbuk2 try hard to inject a little personality back into this space. They play on the whole bikes and San Fran thing, bringing a bit of the messenger vibe into airports of the world. They recently sent us one of their carry-ons to have a look, and so before we start hauling it through dodgy third world airports, we figured we’d share a few initial impressions… While we normally start a review looking at the front of a carry piece, it’s the back we’re digging most with the Copilot. There’s some pretty trick hardware that’s on full display, sporting fancy anodised tubing and some industrial allen-head bolts. It definitely has the feel of a fancy mountain bike. Externally mounted telescoping handles can be a nightmare on luggage. If they get a ding, the mechanism jams up and the handle won’t extend. The Timbuk2 folks have got around this by using extrusion with a little rib running down it, something which should radically improve resistance to dents. This lets the handles stay outside (for space and base integrity), which is otherwise a good thing.

They’ve also spec’d some pretty soft skate wheels, which quiet the ride, jump more easily over bumps, and reduce scratching of nice floors (when a pebble jams under harder wheels). 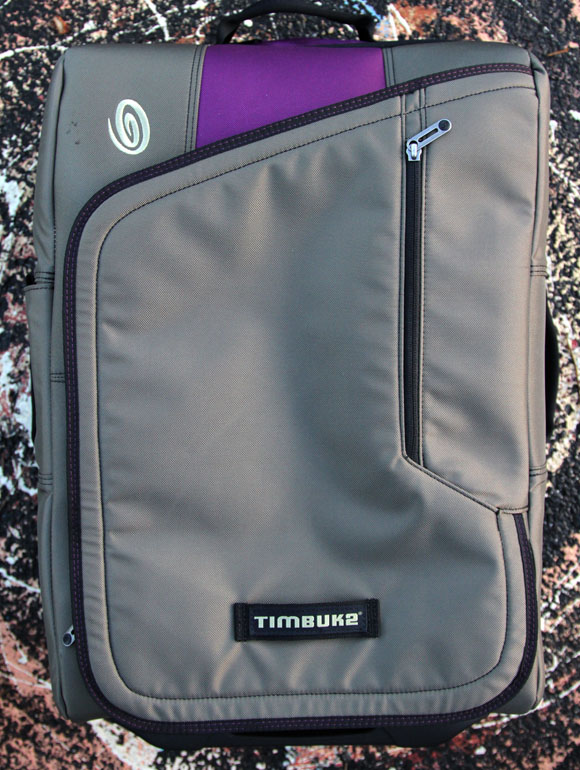 A good carry-on can’t just be about internal space. Because it often serves as your only bag, it needs some nice external pocketing for work bits, food bits, and travel related bits. The Copilot deals pretty well with these, even adding an externally accessed shoe pocket at the base*. For the general vibe of the bag, we thought it might have a water bottle pocket, but there is a front pocket that can be hijacked into that if need be.

*Ed’s note: Shoe pockets are a weird one. They are always designed at the base of bags (because shoes are ‘dirty’ and belong low down). But if you’re not using the shoe pocket, all the contents inside slip down and squash the pocket flat. So while they really should be designed higher up, we think it would wig crew out, so we understand why they are low down. Wow, did I just confuse you like I did myself? Not much to report here, other than they’ve followed all the good conventions (mesh with neoprene expansion bits), and avoided most of the bad (loads of useless contraptions that just add weight). They could probably do with an elastic for holding down your shirts/suits, but it’s pretty solid overall.

We have the smallest of the Copilot series (20″ vs the 22″ or 27″). At just over 3 kgs (almost 7 lbs) this is still not a lightweight bag. If you live in Australia, Europe, or any of the countries that have pretty restrictive carry-on limits, you’ll only just be scraping through with this one. However if most of your flying is done around North America, you’ll be laughing.

The looks of this are not going to suit everyone. But if you’re into your ultra cool carry craft, you won’t have bothered reading beyond the first image, so we can ignore you. For everyone else, what you see is what you get. It’s unapologetically borrowing from bikes, it’s using contrast colors to make a statement, and it generally goes for function over beauty. In other words it’s pretty classic Timbuk2, which has a very loyal following. This is a solid carry-on that will find an appreciative audience. It’s size and weight shows its North American roots, but it then adds some big doses of fun in their approach to the hardware.

The Copilot feels fairly well made, with key wear areas getting the rounded treatment and everything spec’d pretty thick and solid (and Timbuk2 have a pretty reasonable warranty if things do go wrong). If anything, the whole bag feels a little chunky, but that’s the way lots of people like to roll.

Now, back to planning our next trip where we can really try it out…