Such a simple idea. Such a great one.  They’re convenient.  They’re cheap.  Most airports have them.  And they’re travel lifesavers…nothing short of it. Travel Scenario #1:
You live in San Francisco, where you departed from for an epic three-week long backpacking tour of Europe with your significant other. You each started out with a nice new adventure backpack, which slowly got more and more full along your travels from Spain, France, Italy, Switzerland, Germany, and finally the Czech Republic.  Now, you each have a backpack that is so packed and heavy, the shoulder straps have become your torturous enemies.  Plus, now you’re each carrying two tote bags that you bought in order to fill them with additional stuff you acquired on the way.  We would usually say “carry less”, in this situation.  But, who could pass up that original Picasso tile for 80 Euros?  Or a bottle of 2006 Bordeaux for the USD equivalent of $23?  We won’t knock ya for that.  So, you’re finally making your way home, departing out of Amsterdam Schipol airport.  Your final leg of the trip has you flying from Prague, Czech Republic to Amsterdam, where you’ll spend just over 48 hours exploring the Dutch capital city. Then from Amsterdam, finally home to San Francisco.  You’ve booked a hostel online in the Red Light District, ready for your arrival. But you realize, lugging around all this massive unwieldy luggage is a giant painful hassle.  The thought honestly makes you want to consider just going home early.  You know that once you land at the Amsterdam airport, you have to strap up your bags after fighting them up off the bag claim carousel, work your way through the crowds of the airport (only 50 million passengers here each year), run to the train (bags painfully bopping up and down on your tired torso) to catch a 20-minute ride into the city of Amsterdam proper, and then finally strap those packs to your aching backs and walk just about 1 mile from the crowded train station to your hostel, bumping locals and tourists with your bags sticking out past your sides.  The two of you now take up the space of a small elephant walking through the 12th century city’s uneven cobblestone streets and over some of its 2,000 or so small bridges.  You and your significant other quickly become “those tourists” rather than carefree travelers in a fun international destination.  Sounds like Hell to me.  All because of the excess bags. 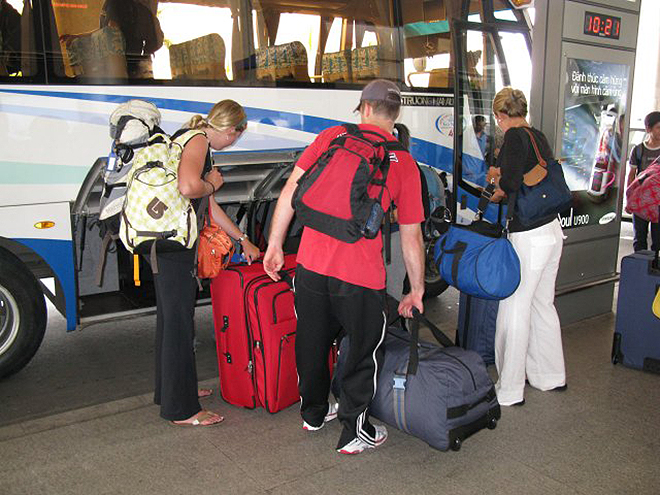 Imagine if you could do all of this, minus all the luggage, the physical pain and the hassle.  You’d each simply have one small messenger bag, containing just the bare essentials for what you need for those 48 hours.  It all starts with packing less.  But we understand in this particular fictional scenario.  This is a three-week fictional trip to another continent, and you bought fictional souvenirs from six countries so far.  There is no getting around it, your fictional luggage is huge for great fictional reasons (but still…pack less).

Travel Scenario #2:
Another (real) scenario…a friend of mine here in Austin is taking a one-year full-time chef position in Norway, coming up shortly. He’s selling most everything he owns and consolidating it into a few choice bits of luggage, then bringing it all with him over to Norway.  He’s set up his flight so he can hang out in London for four days and four nights for a mini vacation before arriving in Norway to settle in.  Realizing there was a flaw, he was panicking a bit about what to do with these two massive bags containing everything he owns while he explores the city of London.  Certainly he wouldn’t bring them with him into the city.  It was never even a consideration or option for him.  His best thought was to box them up and ship the bags from Austin to Norway, via FedEx.  Something like $650-$800 for the pair of boxes.  Insanity.  Now remember, he’s allowed to have two massive checked bags for free on his international flights, plus his carry-on bag, plus his “personal item” (read: second carry-on bag).  Was there a way to save him that shipping charge without having to lug around these mounds of stuff?  Indeed. Airport lockers to the rescue.  Such a simple idea, which I’m sure many of you seasoned travelers already have utilized first-hand.  I’m making this post because I never used them, and just realized how brilliant they are.  I was enlightened to this new travel accommodation.  This post is for everyone else like me who hasn’t looked into these genius groupings of negative spaces with locking doors.  If I would have seen the light earlier, some of my previous travels could have been even better, I’m 100% certain of it. On a recent two-week trip to Asia, I had a 25-hour layover in Tokyo, designed that way so I could go explore the city on my way home from the Philippines, where I was at for the bulk of my trip.  After arriving at the Tokyo Narita airport, I was not able to check in my bags until four hours before my flight the following day, which left me stuck with them.  I had some serious luggage (shown above); my DEFY Bags Recon messenger bag filled up and weighing in around 15 lbs (carry-on bag 1 of 1), my Billykirk No. 166 Carryall swallowed up enough gear to easily weigh 30+ lbs (free checked bag 1 of 2), and one extremely massive bag given to me from the factory, filled up with a minimum of 12 different large and medium-sized bag prototypes to bring home to the U.S. (free checked bag 2 of 2).  This giant black and red nylon box is easily 25″ wide, 25″ tall, and 20″ deep, weighing in somewhere around 40 lbs.  Maybe more, thanks to the gin and rum in there.  Note the orange “HEAVY” tag.  Not necessarily ideal to take through the train stations, subways, and sidewalks of Tokyo.  You know, just one of the most space-conservative cities on the planet, where people literally sleep in capsules (like I did for a night).

Guide to Airport Lockers:
The instructions for how to use these things are ridiculously easy and convenient, anyone could figure it out using their basic common sense.  But I’ll cover it anyway, just in case (and since I admittedly had no idea).  If you’re arriving internationally, you’ll need to scoop your bags from baggage claim, take them through the watchful eye of customs, finally exiting the customs area.  If you’re flying domestic, you just skip that customs step.  Either ask airport information or check the map to find the closest airport lockers to you and your gargantuan ball-and-chain luggage.  Drag it or cart it over.  The best thing to do now is a little bit of a repack in this generally quiet and low-traffic corner of the airport.  Take your time.  Who cares if your stuff is everywhere. The key is to get rid of everything you don’t need, bringing only the basics.  For my 25 hours in Tokyo, I brought a stick of deodorant, one clean tshirt, one pair of clean socks, one pair of clean ExOfficio boxers, digital camera, iPhone charging cord, the medicine pouch from my Dopp Kit so I could conquer a looming cold, and an extra bandana/furoshiki since it was warm.  That’s it.  Just the essentials. Next up, find a locker or lockers that are suitably sized for your unwanted luggage.  They’re left unlocked, unless there is already baggage inside of them.  So feel free to browse and test fit.  Myself, I needed two.  At the Tokyo airport they had three size options; small, medium, and large.  300 Yen, 400 Yen, and 500 Yen respectively (100 Yen = about $1.00 at the time of this article).  Don’t be fooled by the visual size of this 500 Yen (large) locker shown above, as this photo doesn’t accurately show the scale.  Inside this thing is huge.  It stowed up that massive black and red bag filled with bag prototypes, plus the eliminated excess stuff from my messenger. The door opening is about 22″ wide, from left wall to right wall, and very deep.  Two small children could have a tea party in here.  Though our lawyers wanted us to mention that we don’t suggest anyone tries this.  Editor’s note: I just noticed the “No small person entry” warning graphic on the inside of the open door near the top left of the photo there, ha. These set prices are good for a whopping 8 days.  But you can come back anytime before that to claim your stuff.  Once you’re down to the bare necessities, pop your unwanted stuff in the locker, close the door, and finish up on the automated screen.  The door locks, lights flash, and it prints you out a receipt.  It is really that simple.  Here is the key…DO NOT lose this printed receipt.  This contains the locker number and the PIN number to access your bags.  If you don’t have these numbers…well, you’re not going to get your bags back without a giant headache. I snapped backup photos on my phone as some insurance, just in case the two locker receipts went missing from my Bellroy Passport Sleeve travel wallet.  Some other airport lockers use a physical key system, where you remove the key and take it with you.  The same idea applies.  Don’t lose that key.

Once I was finished up with exploring the city of Tokyo, upon my arrival back to the Tokyo Narita airport I went over to the display (which has a one-button English option at the main screen), punched in my codes, and my bags were ready to go.  Done and done. Sometimes the best carry is to not carry at all.

From my research online, it appears that many major (and even not-so-major) airports have these lockers available for travelers in the know.  And they’re all equally as affordable, between $2-$10.  Usually lasting between 3-8 days, sometimes even longer.  Look up your next destination airport (or train station) ahead of time to get the detailed rates and info.

Additionally, some airports even have a baggage check location.  You go up to a counter (either owned by the airport or by a third-party business), hand your luggage over to a human, they take down your information, you’ll pay a fee, then receive an identification receipt of some sort and finally be on your way.  The same basic scenario as travel lockers, with the addition of a real human being (which potentially could be good or bad).  Sometimes this system is more expensive, sometimes equal or even less.  We’ve even heard that some airports do it for free.

Anyone else hip to this method of travel?  Is this idea new for any folks who are also eager to give it a try?  Let us know.

Traveling with Bo :: How I Pack