The brains trust at Carryology call me ‘Berlin Muse’, but lately, I’ve been feelin’ a little fraudulent. Since arriving to my new Deutsche home, it feels like I’ve barely spent any time here at all, hardly enough to warrant a title of such repute. On top of recent bounteous forays to the south of France and Prague, I found myself shooting abroad again, across the EU and beyond on a cross-continental tour with my old chums from back home, the Melbourne Ska Orchestra. The MSO is, at full roar, a 30-piece big band with a penchant for ska rhythms of the Jamaican 1960s and the English two-tone sound of the 1980s. It’s got a 15-piece horn section. It’s a raucous beast and, as you can probably imagine, a monumental coterie to propel from one side of the world to the next. I’d be joining my MSO brethren and sistren for a club show in London, tacking on for the full ride to Glastonbury, then on to Canada: Montreal, Quebec City, Toronto and the Festival of the Northern Lights. As well as a chance to cut loose, rock out and tick off a few huge boxes on my life bucket list, the tour would provide a perfect moment to dole out a vigorous road test on my latest carry acquisition – the deluxe BAM cherry red Tenor Sax Cabine. BAM craft some of the sleekest and slimmest musical instrument cases on the market, and for sensitive saxes, slim is the best. As I mentioned in my review for the RB Continental, the more compact your case, the easier it’ll be to navigate airline rigmarole and be able to chaperone your horn safely on board with your carry-on stash. On first impressions, I could see that there’d be no problems with the BAM – the dimensions cut it for airline carry-on specs, plus its robust hardshell case meant that if it did happen to be hurled in with the plane cargo beneath, chances are its high-density polyurethane foam cradle and antishock textured ABS outer shell would let it live to wail another day. 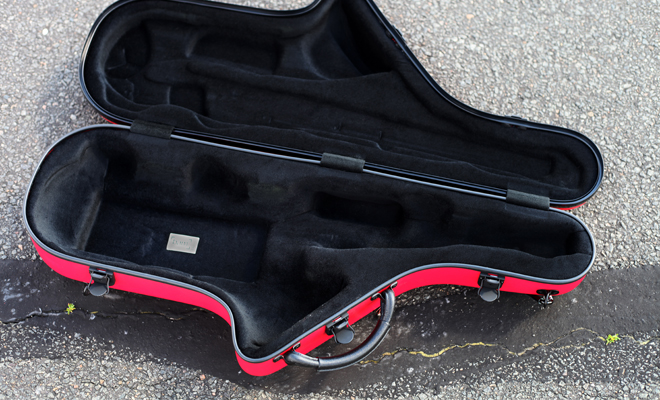 The real cherry on top was BAM’s attention to detail – the case comes with two reinforced neoprene anti-slip straps, so you can carry over the shoulder with ease, or turn the case into a backpack, fastened securely to the case with rock climbing safety locks. Concerned that my vintage Ladyface horn was too chunky for the BAM’s intimate hold, with a bit of tweaking – cosying the neck strap and mouthpiece in the horn of my bell rather than underneath it – the old girl was as snug as a bug in the sleek black velvet inlay. Though petite, the matt finish, soft touch latches clasped the outer shell of the case with airtight ease – this case wasn’t just ‘handling’ my horn, it was spooning it, whispering sweet nothings into its keyholes, the Serge Gainsbourg to my Jane Birkin. Better still, at 3.5kg it was a featherweight, a formidable long-haul companion. It’s unusually balmy in London, even for summer, and the city streets give off that idiosyncratic UK smell that I can never seem to define – hints of flint strike and centuries-old charred stone. I wander through Camden, spiritual home of British two-tone ska, birthplace of Madness, the Specials. Our show at ‘The Forge’ is a sell out, 300 sweaty punters get their skank on, partying effusively into the night. Post show, one fan declares his love: “Brought me wife, me trainer and me lawyer tonight. Can’t get enough of youse guys!”

Buzzing off our first night romp, we bus out the next morning to the greatest festival on earth, Glastonbury. We pass Stonehenge, where the crew spouts Spinal Tap film quotes, and a Chinook helicopter roars high above, probably Metallica heading in for their headline set.

A vicious electrical storm shadows us as we pull into the festival gates, and the lightning is intense enough to shut down the festival’s power supply. Halting our entry, grim skies eventually give way to a majestic double rainbow – a great omen! 250,000 voices roar through the countryside, validated by the Gods above, juiced and ready to cut loose. Glastonbury’s reputation is immediately justified. It’s a diabolical mud fest, an anarchic collusion of ten or so smaller festivals rolled into one gigantic city of debauchery. That night, we perform in the seedy crotch of a hedonistic night hub called the ‘Snakepit’, arse end of the intrepid Shangri-La sector, self-billed as ‘heaven, hell and purgatory’ rolled into one. The joint is a heaving, dancing, munted mess. We pump out another show the next night on the much larger and substantially less seedy Gully Stage. The MSO recipe connects, as the sea of heads go off with wild yawps, mud flings and sheer, unadulterated Glasto-madness. Post-set, I slink through the masses out to ‘Arcadia’ on the hillside, where the hydraulic arms of a giant spider, built of jet engines and helicopter chassis, pelts dry ice and naked flame at hoards of glass-eyed punters. But it’s time to push on. Orphaning our mud-addled Wellingtons at the bus door, we creep out of Glasto in the middle of the night, through sleepy towns of mythic rural misty England, on to Heathrow, on to the next adventure.

***
A day passes I think. We’re in North America now, Montreal, sweating in clammy French Canadian heat as strange Glastonbury memories swirl and haunt like drugged spectres in our busted body clock minds. After checking in at a hotel on Rue Sherbrooke, we trundle nearby through the grounds of Montreal Jazz Fest. Crooners filter velvet from open-air stages and jazz pours through the twilight streets. We satiate our cravings for poutine and beer at a dive bar, its walls violated with neon. The night is young, but we are not, carb-addled and comatose.

The MSO performs a few warm up shows over the next two days, busking in sweltering heat on Rue St Catherine, wailing brass and beating drums and bellowing gang vocal chants, magnetising healthy crowds each time, jovial locals who dance and smile and yelp and groove, delighted to have stumbled on this random street party of motley Australians. A mining magnate named Don shouts us rounds of Heineken at the beer tent. With ample leisure time in the sweet French Canadian city, the nights are long and loose. Hot, dirty poutine seduces at every intersection. Three nights in, the MSO gets its moment on the main festival stage for our premiere evening show. Blasting out our fanfare opener, strutting out from the backstage darkness, all of us rush with spine tingles at the sight before us – the Montreal body collective – a heaving mass of heads and arms and grins and eyes, 50,000 or more, snaking all the way around Rue St Catherine where more ogle our antics from a big screen projector. The crowd participation is electrifying, a clamour of 50,000 backing vocalists. An elated scene backstage; the tour has peaked.

An unkind 9am lobby call plunges us back to earth the next morning when we board our bus for Quebec City. The highway flies past in a daze of semi-consciousness. Upon arrival, I foolishly eat poutine for lunch. It is here that I lay my latest addiction to rest. I cannot keep consuming this dish and expect to avoid cardiac arrest. To curtail the burgeoning spare tire around my waist, I put on my runners and huff through town, jogging past the venerable fort by the sparkling Quebec City waterfront, and the majestic spires of Chateau Frontenac, imagining the extravagance of the décor inside its deluxe turrets as I sweat out gravy and cheese curds.

An incredible line-up graces the ‘Fete D’Ete’. The MSO is amongst giants here – Blondie the next night, Billy Joel, Soundgarden, and Journey. Post-tour, I’ll be able to say I once shared a bill with Cypress Hill and Snoop Dogg.

While not quite as colossal as Montreal, ours is a ripping show; the Québécois are allegiant, holding stoic in the tepid rain, chanting “Ole, ole, ole” to coax us out for an encore.

The lobby calls are getting out of control. Another ‘dawn’s crack’ bus call the next morning compounds the band’s already knackered state of affairs. A stocky nugget with builder’s frame joins me in the elevator to the lobby. “Where y’off to next?” he says, eyeing my cherry red BAM. I sputter. “Uh…” For a second, legitimately unsure where I’m going, or where I am. The fella chuckles all gappy toothed. “Know how ya feel…been doin’ it 30 years, man.” He tells me he drums for Lady Gaga. It’s tumbleweeds in the lobby. A slow trickle of MSO crew sloths from the lift and over the polished marble. I drink hotel coffee that’s blacker than night. We load the bus, pull out into the sun-hushed Quebec morning for the very long ride – our next port of call: Toronto, only 9 hours away.

The Toronto show is one of the weirder ones. We’re billed on an open-air stage in Dundas Square, Toronto’s version of Times Square and though we perform well, we battle for attention with the slew of neon billboards advertising Gillette shavers and $5.95 bikini bottoms from H&M. Eventually we connect with our gazy Torontonians, and it culminates in an all out drum and horn street party in the middle of town. Post-show festivities at ‘The Imperial’ dive pub are loose, jovial and delightfully poutine-free, though we supplement calories with baskets of deep fried pickles and jalapeno poppers and wash down the mess with pitchers of Amsterdam and round after round of Crown Royal.

It’s another dusty wake up for the 4-hour rush north to Sudbury, home of the Festival of the Northern Lights. The Canadian landscape is stunning; maple leafs and territorial stone markers line the endless roadsides.

While we can’t actually see any Northern Lights (learning later that they hadn’t been witnessed in Sudbury for over a decade), the crowd’s cell-phones held aloft in luminous unison make for a fine substitute.

Post-show, the band breathes elation tinged with melancholy. The final show of the tour is over. Exhausted, triumphant, we return to our college rezzies accommodation, where students and locals jive with festival performers – an unofficial post-festival frat bash, with ‘keggerators’ and intense rounds of pong and foosball.

Our valiant tour manager, the great Niki, ferries a few of us back south to Toronto airport in the middle of the night to meet an early flight. No sleep, just road, and road-kill, until daybreak pushes out of the gunmetal blue horizon, and meets our bagged eyes with majestic sunrise, flecked with stratospheric gilded feather cloud. I cart my gear into the terminal, casting a glance at my red BAM Cabine in the sliding door reflection, battle hardened, worn in, gleaming cherry still in the crisp Canadian morning. Looking a lot better than me right now. An Air Canada 767 jets us back across Atlantic skies, to London, back on to Berlin.

I sleep for a week, dreaming of clouds and crowds and poutine and mud, as my sax slumbers now too, dormant in the warm hold of its cherry red home.