As a writer, I, like Gaiman, rejoice the rare good days. If only more could be coaxed out. Every writer has their routines to try (or a calculated lack of), so too, their selection of gear: it’s a truth not often acknowledged that simply having a slick swag to cart your pens and pads around can make all the difference between a Gaiman ‘good day’ and the grisly hell of tomorrow.

I’ve relied on a backpack for my whole writerly life: go-to for all-purpose, multi-task carry. Yet there comes a time where an extra nudge of class and refinement – a tailored option for the niche purpose – can’t be done without. And that, folks, is when a good leather satchel-briefcase gets the call up. Whether you’re a writer, painter, or avant-garde performance artiste with a penchant for small goods, having a bag that meets the daily need – one that rises with you each morning to contain in style and supportive grace the instruments of your trade – ought to be considered an indispensable accoutrement of your gig. So when the Cravar Alpha 15/Rust landed on my lap a few months ago, I got more than a little tingly in my writerly bits.

“…having a slick swag to cart your pens and pads around can make all the difference between a Gaiman ‘good day’ and the grisly hell of tomorrow.”

Based in Jakarta, Indonesia, Cravar make beautiful and practical leather bags and journals. They’re one of the new kids on the carry block: founded in 2013 by photographer-designer Yoki P. Baskara, whose extended jaunt through Italy – and in particular, an encounter with a unique antique leather goods store – swayed his passions toward the world of leather. Brimming with inspiration on the return voyage, Baskara etched away at a suite of blueprints that would become Cravar’s prototype line. Joined by partner Rama Luhur, they’ve since expanded their setup, emboldened by two highly successful Kickstarter campaigns; their first, in 2013, giving rise to the Alpha: their take on the classic briefcase. 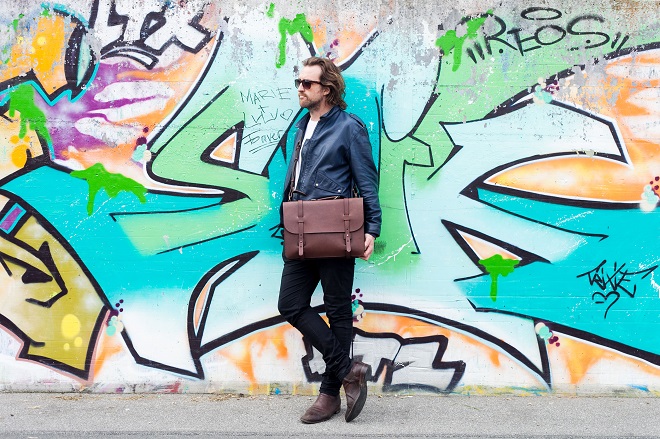 The Alpha’s handsome looks belie a very stylish and thoughtfully designed modern bag: capable of housing a 15-inch laptop (I wedged a 17-inch MacBook in with reasonable ease, though probably not recommended), with a central divider sporting two taut pockets for a neat inlay of files, folders, journals and bookish paraphernalia. The bag shuts via a duel-strap system, which weaves through the front panel, clipping into studs through a choice of three holes for sturdy and reliable containment. Grip-wise, you’ve got choice: a top leather handle gives you a very cool briefcase look. Hurl its adjustable leather strap over your shoulder and you’re in satchel town (or dare I say ‘batchel’). Both grips are held in place by square brass buckles, with neat ‘D’ buckles appearing on the shoulder strap in the absence of snap hooks. Depending on how much you’ve got inside, the gussets fan out like a mini accordion, another neat design sealer.

The bonus inclusion of a leather journal – as well as my initials branded on both bag and book – was a thoughtful touch. Big ups to Cravar – I’ve enjoyed many more good writing days since. Meanwhile, life in Berlin continues to inspire… 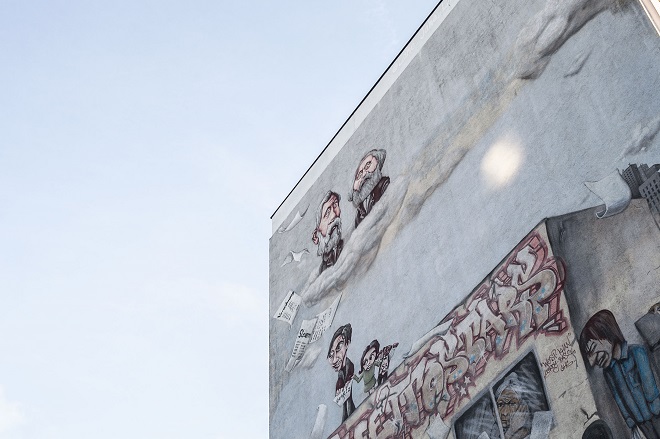 Deep into the West

Since the Wall fell a generation ago, Berlin has enjoyed an explosion of creative energy. Its volatile history and quality of life maintains it as one of the most attractive and inspiring cities in Europe to live in. Yet it’s not the first time it thrived like this: in the roaring 20s, Berlin’s west – near and around the Kurfürstendamm (or Ku’damm) strip of the Charlottenburg neighbourhood – was a hotbed of hedonistic creativity. Marlene Dietrich shone in the limelight; Otto Dix painted Stormtroopers; Christopher Isherwood scrawled away at what would one day become Cabaret. Again in the late ‘60s, West Berlin percolated: an unorthodox island of political and subcultural resistance surrounded by the Iron Curtain. In the 80s, the neighbourhood of Schöneberg sprouted fierce counterculture. David Bowie, Iggy Pop, Nick Cave, Rowland S. Howard, amongst a soup of anti-establishment locals and expats, came seeking creative refuge in the hold of this strange, chaotic, and very liberal wild West.

Toting the Cravar Alpha on a gray, crisp autumn afternoon, HK and I took a ride out to old West Berlin in search of the creative ghosts of yesteryear. From our apartment in gritty Neukölln, we took the Urbanstrasse artery to Yorckstrasse, bike lanes ferrying us speedily through Berlin’s inner south. Sun peeked as we snaked under iron S-Bahn bridges, working our way to 155 Hauptstrasse, Schöneberg, an altbaus apartment block where Bowie and Iggy Pop lived between 1976 and 1979. Graffiti in the driveway attested to it. I imagined the two cycling home through clandestine mornings after long recording sessions at the infamous Hansa studios, chiselling away on works like Heroes and The Idiot. Aptly, I noted, a dentist, tattoo parlour and vintage bookstore had popped up at #155 since. We took a peek in the latter for a literary dose. The Alpha rested over my left shoulder without qualm or hassle, the Bowie to my Pop, as we pedaled through the cobbled backstreets of Schöneberg. Inside: two A4 Clairefontaine notebooks, a Cravar journal, pencil case, a copy of Christopher Isherwood’s Mr Norris Changes Trains, the second of his two ‘Berlin’ novels. The Alpha felt ultra good and light, oozing class and cool in the afternoon sunburst.

We rode north to Nollendorfplatz, once the hub of Schöneberg’s glitz and glam, where Isherwood spent hours in speakeasies and cafes, eavesdropping on conversations, scrawling notes. He used to live around the corner on Nollendorfstrasse 17. Today, the ‘Stagger Lee’ speakeasy-saloon lurks over the road opposite, named after the Nick Cave song. It was a bit early for cocktails. We paid our respects to Isherwood, rifled through the antique store on the corner, before shooting further north to Charlottenburg’s Ku’damm: once the racy boulevard of the ‘20s, destroyed in the war, home today to a conga line of boutique fashion stores and tourist restaurants. Here, you see Berlin’s modern renewal, as well as its aching spaces in between: in the same scene as Bikini Berlin, a concept mall, pancaked with modern shops and stores, you’ll find the Kaiser Wilhelm Memorial Church, its half bombed spire a frozen testament to a more volatile era. Around the corner down Kantstrasse, we stopped by Paris Bar, a Parisian style bistro: for decades, a popular night-time huddling spot for the west’s artist and thespian community. As the day waned, we drifted slowly back east through Gleisdreieck, the largest urban renewal project in Berlin: a vibrant green corridor flanked by modern apartments, skate parks and leisure spots. I unlatched the Alpha, pulled out some Isherwood and indulged in a few pages, as yellow U1 trains rushed past on the overground line, and a city of ceaseless transformation danced on at its own pace. – Sexy as hell, one handsome beast

– Spacious for the size – Possibly too ‘niche’ for some carry pundits 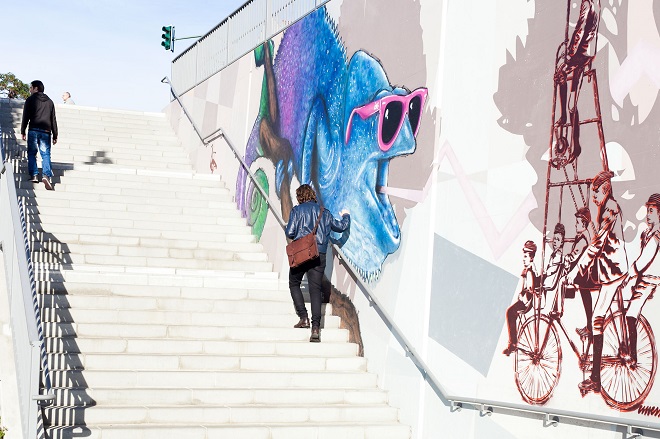 In the words of Christopher Isherwood: “Berlin had affected me like a party at the end of which I didn’t want to go home.”

To quote me: “The Alpha Rust is a bag I never want to stop using.”

This is a great bag. I feel better about myself wearing it. It turns heads. Isherwood probably would have loved it too.

There’s no faffing about with florid semantics at Cravar; they do what they say they do, and they do it well: simple products with modern functionality and classic elegance that last, look good and stay practical. The Alpha, their first showpiece, is a finely and thoughtfully constructed, timeless satchel-briefcase, and certainly seems to live up to, and underscore, that mantra.

“This is a great bag. I feel better about myself wearing it. It turns heads.”

Simplicity is nailed here: the whole thing is constructed using just two large pieces of leather – vegetable-tanned, a credit to the company’s commitment to lasting quality. It really gives the Alpha its panache; it has that good leather smell, and you know the patina is going to age like a fine red.

Critically speaking, it’s a pretty masculine offering, and probably won’t appeal to a very devout female audience. Although from a purely aesthetic perspective, this is a bag that everyone across the board can appreciate. It nods to yesteryear, but it’s far from stuffy, treading the classic-modern balance with delicate nous. Should the rest of Cravar’s styles meet this trend, they’re poised to be around for the long yards.