For our latest Drive By featuring the Dragon Egg from Direct Action, Pete Barfoot was the obvious tester choice. A marine biologist and hunter who believes in low-impact and respectful hunting as an important part of life, Pete is no stranger when it comes to testing tactical/hunting packs. Find out what he makes of the Dragon Egg below… The Dragon Egg is a 25-liter military grade basic assault pack which translates to a hard-wearing multipurpose daypack for civilians. With a lack of military conflict in the Jan Juc area (thankfully) I had to come up with a creative alternative for road testing. A recon mission to find feral pigs and deer on a property near Mt Cole in central Victoria seemed like it might work.

The pack did about 50km of hiking over a few days in semi-open undulating terrain. It has also been getting a workout on the back of a motorbike as a daypack.

Someone looking for a multipurpose backpack with a good mix of internal organization and external carry options. The bag lends itself to daypack use and outdoor activities.

The Dragon Egg has a distinct tactical vibe to it that won’t suit formal work settings. Plus taller crew may struggle with it. 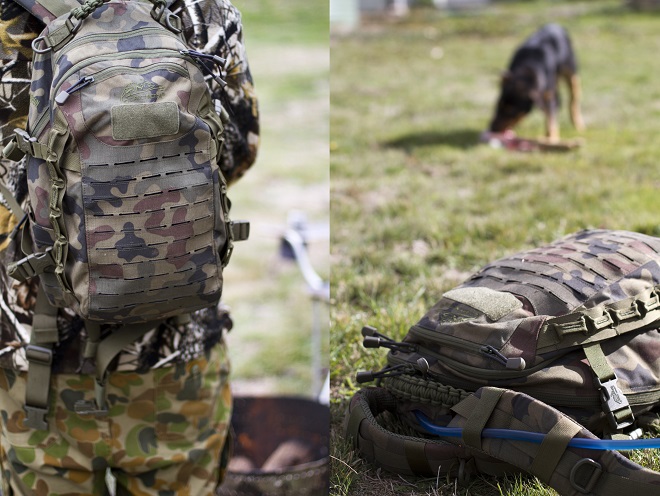 The pack is designed to carry more than its 25L capacity; it has 8 webbing straps with Duraflex® hardware, a set of 6 daisy chain loops down each side and webbing compatible mesh on both the front and lower sides.

The bag is made from a laminate 500D Cordura and has heavy-duty YKK® zips. The back panel is ventilated using the Combat Vent System® with quick-release buckles on the carrying straps. The pack is divided into 6 separate compartments with 3 of these having further internal organization. The Dragon Egg has a dry weight of 1425 grams, is available in 11 colorways and is hydration bladder compatible. The backpack that Direct Action had sent us was in camouflage and 25L capacity works well as a day hunting pack. My first impressions of the pack were that it was very well constructed and that it had a lot more compartments than I was used to, reminding me a little bit of a school bag. The zip toggles have a rubber tube cover that allows them to hold some structure, allowing the user to slip their finger in the hole and get to the gear quickly. This worked well in combination with the quick-release straps as you could drop the backpack quickly, smoothly open a compartment and get an essential piece of kit like a rangefinder out in seconds. The laser cut PALS/MOLLE on the front and sides was a good way to beef up the carrying capacity using some webbing. This feature allowed me to pull an overnighter on the moto.

The Combat Vent System® worked better than any pack I have used. Even in cold climates when ski touring I have problems with contact areas getting sweaty. However, the Dragon Egg seemed to stay reasonably dry which is a real bonus in hunting when your quarry’s best sense is its nose. The two webbing straps on the bottom of the pack had additional tabs, making them more versatile. Conventional straps usually go from point A to point B but the Egg’s extra tabs allowed for at least 4 different carrying methods. It’s a good multipurpose pack as you can take it out and get it dirty but it also works well as an everyday pack with functional areas for laptops, phones, keys, water bottles, clothes, a towel, wetsuits (has a drain hole), food, books etc.

“The Combat Vent System® worked better than any pack I have used.”

A simple but really handy feature on the Dragon Egg was the woven paracord handle. This can be unwoven and used in case of an emergency or when you forget to pack your rope.

The daisy chain loops down each side worked well for carrying extra items but also for clipping the pack onto the moto. Upon moving my gear from my old pack to the Dragon Egg I had to come up with some creative placements – knives in the laptop section, rangefinder in the sunglass compartment, ammunition in the radio flap etc. It was all going well until I zipped it up and put it on my back, at which point I thought how aptly the pack had been named because it felt like a giant egg. The internal pockets had conspired in such a way that when loaded up they pushed outwards and crowned into the back of the wearer, so I reshuffled and made it fit a little smoother.

“…I thought how aptly the pack had been named because it felt like a giant egg.”

The major problem I had with the backpack was the fit, the whole feel of the bag once on your back was not comfortable, which for a lightly loaded recon bag is not ideal. The carrying straps were too short and close together so the pack rode high and awkwardly on my back and pinched my neck. Thinking this might have just been my body shape I had my hunting buddy wear it but he lasted about 3 minutes before asking for his pack back. The internal organization tends to point load areas which translates into awkward bulk and discomfort. This can be avoided but it means a number of the internal pockets go unused.

“…the whole feel of the bag once on your back was not comfortable, which for a lightly loaded recon bag is not ideal.”

The chest strap also felt really high and could not be adjusted to go any lower, which was uncomfortable and meant I could not use it to hold my binoculars in place. The Direct Action Dragon Egg would be a great daypack for a shorter person or a good multi-use pack as long as you are not hiking for an extended period and it is not heavily loaded. The bag is really well designed in terms of features and compartments, if you could adjust the straps and stretch the loading out to reduce the egg-like feel.