How much are you carrying in your go-to daily bag?

Have a trawl through and ask yourself if you really need everything, every day, to the point of justifying lugging around a bag.

Chances are you don’t. That raises a question worth tackling: at what point do the things you’re carrying around to improve your day become a detriment?

If you’ve crossed that line, it might be time to change things up. And a sling bag – a small bag for the essentials – might be the way to do that. And yes, before you ask, these are also called ‘fanny packs.’ And ‘yes’, your dad did wear one. And ‘no’ you don’t understand, because they’ve changed a whole bunch and they’re having a resurgence.

So let’s talk about it. 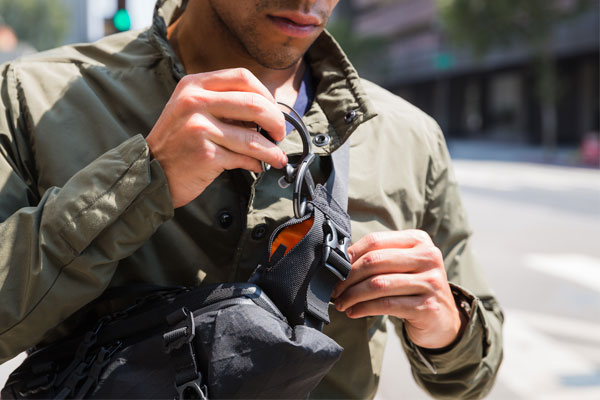 The crossbody sling bag is a modern tweak of an old idea. Picture the humble fanny pack. Now imagine you’re wearing it on your back, slung over one shoulder. And there’s a whole lot more style to it – and in some cases, more pockets and a diverse array of materials.

Right now, these bags are surging through Asia, Europe and the US, buoyed with a lot of love from the streetwear scene.

The trend makes sense: sling bags are perfect in warmer weather (no more backpack sweat for you), they’re a more practical alternative to things like tote bags for smaller items, and they provide more ergonomic options than messenger bags (over the shoulder for style, around the waist to distribute some weight).

They can also simplify your life as you go about your day. Less bulk to manage, fewer pockets to check for whatever it is you’re looking for, and less impulse to fill space. Used correctly, they’re about ease as much as they are about fashion (see also: the micro bag trends). Unzipping the history of slings

You can’t keep a good idea down – even if people haven’t been down with that idea for decades.

The fanny pack or bum bag (in my native Australia, the former name has some eyebrow-raising connotations) has a long and storied history – going well beyond just being an example of the egregious fashion choices of the ’80s and ’90s.

People have been attaching things to their waist with a bit of fabric for centuries. From the sporrans in Scotland (those hairy things you see on the front of kilts – I’ll emphasise “on the front of” here), to detachable ladies’ pockets and countless other examples from around the world, the bum bag has a long lineage when it comes to carrying small things in a way that’s slightly more convenient than carrying them in your hands.

Handbags became a staple for women with things to carry throughout the mid-1900s (and let’s be real: sling bags and bags like them are 100% just a way to “masculinise” purses so dudes don’t feel weird about carrying one) and the world of outdoor adventuring highlighted the need to have something reliable to put your stuff in. By the 1980s, people had really come around to this whole bag idea as a lifestyle choice.

It’s not even an idea unique to humans – kangaroos have been using fanny packs for centuries, carrying their babies in pouches. Maybe that’s why an Australian woman by the name of Melba Stone has been credited for inventing the modern bum bag in 1962. However, Jennifer Mason has found an earlier instance of the bag, suggesting that this might be an area ripe for scholarship. It wouldn’t be until the ’80s and ’90s that the creation really took off. The ’80s style icon Neneh Cherry wore a fanny pack to the MTV Music Awards (has there ever been a more dated phrase?); Chanel glammed the bag up. Before you know it, they were everywhere and on their way to being a staple of ’90s fashion (see: The Rock wearing a bum bag, proving their fame and that The Rock wasn’t always the bastion of cool he is now) and gay culture by way of gym culture.

Then, of course, came the rejection. Neon fades and rollerblades break and, with them, fanny bags lost their lustre. Weird Al even made a joke about them, driving home the fact that the bags belong in the ’90s. The bags made a brief attempt at a comeback in the 2000s via normcore, which is still as confusing to me now as it was then.

The problems posed by the ’90s and 2000s didn’t go away though, did they? Tech clicked along at a terrifying rate, creating an ever-expanding array of gadgets to carry around with us: Walkmans, Game Boys, and, of course, mobile phones and smartphones, those little omnipresent threats to society.

We need something to hold all of those things. Now we’re here again. (As someone very much into gadgets and bags, I’m here for this.)

Fanny packs are getting fashionable, thanks to gorpcore, streetwear, the UK’s grime aesthetic and an ongoing obsession with “working class fashion” (although it’s probably best described as a pastiche of working class style, since the people rocking the clothes and writing about it all don’t really seem to know what being “working class” actually entails). Rihanna wore one, A$AP Rocky did too and Supreme slapped their logo on one with Louis Vuitton. Here’s the thing. It feels like people have been writing about how bum bags are “cool again” every year since they apparently went out of style.

That means a few things might be true: fashion could be on an even tighter circle than expected, writers might be desperate for something to complain about or comment on, or the bags never went away and it just takes one celeb to decide to wear one to set everyone off because we’ve latched onto bum bags as the focal point for all our shame about the ’90s and its myriad mistakes.

I’m guessing it’s all of them.

It helps that the bags are a good idea. Sometimes you have too much stuff to carry in your pockets and not enough to justify a big bag. Fanny packs to the rescue. They just need a re-brand to not seem like something your dad used to wear on the way to getting his mullet trimmed. Enter the sling bag. (See also: “waist bags” – this bag type has more names than they have compartments.)

Now it’s just a matter of deciding where they fit in your carry world. 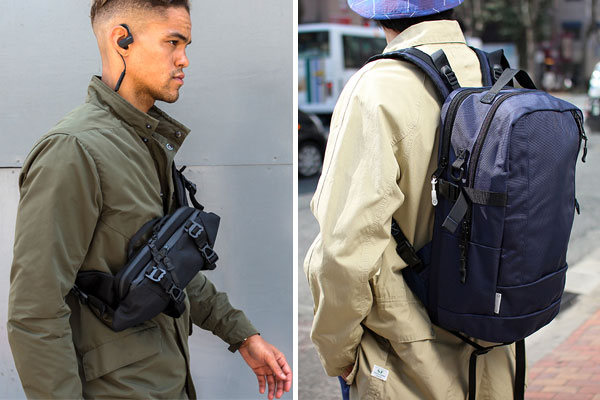 Let’s break it down. If you need a laptop, a water bottle, chargers, a book or two, a jumper and whatever else, you’re in backpack territory. They have the space. And they’re better at carrying heavier loads by distributing the weight across both shoulders.

But having space can be a dangerous thing. We have a tendency to fill it just because we can. There are industries of knick-knack nonsense built exclusively on the fact that people want more and more room and, the moment they have it, they feel a need to fill it.

A sling bag can help you short-circuit that habit. If you just need (or want) a few smaller items – keys, wallet, headphones, whatever – skip the backpack and go with a sling bag.

In addition, when traveling, think about combining the two. If you’re getting out of town for a while, throw a sling bag in your pack: it’ll fit and provide a quality day bag for any adventuring you do on your holiday. The lines start to blur a bit when you talk about sling bags and messengers, especially the bigger versions of the former and the smaller examples of the latter. Messengers are generally bigger and, realistically, they’ll carry your laptop and a lot of other stuff. Most sling bags, again, are for smaller items.

The bike-inspired messengers rely on a soft form to wrap around your body and take some of the load, so they’re generally not very good with rigid things like laptops which stop this wrap. So the structure of a large sling might work better here (maybe).

However, the real point of difference between messengers and sling bags comes down to style and perception (especially in the office). In today’s modern professional office, you’ll have trouble getting away with a sling. There’s still too much of a stigma attached (thanks fanny packs!). So if you’re thinking ‘work’, think messenger. They’re more universally accepted and come in a range of sharp office-friendly fabric choices like waxed canvas.

Apart from that, it really depends on what you carry and what ‘look’ you’re going for. Slings are now embedded in street culture, so if you want that ‘urban look’, then sling it. If you’re just carrying essentials and want to stay more nimble, then a sling or small messenger is a fine choice.

Let’s be honest. These bags aren’t going away. That leaves you with one simple question to answer: do you want a convenient way to carry a few daily essentials without having to rely on your pockets?

If the answer is yes, buy a sling bag. There are more tasteful examples than ever before, made to suit an ever-expanding array of styles. This isn’t a matter of the bags “being back”. They never left. And, if bag makers keep tinkering away at them, they’re going to be more usable and more practical.

You might even find one you like – and that you won’t be ashamed of in twenty years’ time.

3 slings worthy of your EDC A revised version of the original X-PAK PRO, this versatile all-rounder suits larger daily carry loads and weekend trips. The redesigned back panel provides enhanced comfort and ventilation, while the water-resistant and durable build relishes the daily grind. The bag features two compartments, with the expandable front compartment increasing the X-PAK’s volume from 11L to 23L. The bag fits a 13″ laptop, includes an expandable water bottle pocket, and comes with removable compression straps to cinch the load or secure additional items. If you dig the vibe of the X-PAK but want something smaller to roll with just the essentials, scout out the Code of Bell X-POD. Tough, water-resistant, and compact, it keeps gear organized with two compartments and six zippered pockets. Need a bit more space? The front compartment expands to increase the sling’s volume from 2.3L to 4.5L. Like its big brother above, it comes with removable compression straps. And you can enjoy multiple carry options including crossbody across the back or chest, around the waist, on the shoulder or by hand. The Aer Day Sling 2 combines sleek street style with durable functionality for small carry setups. The main compartment has a tablet pocket (that fits a 7.9″ device) and additional pockets for smaller items. Additionally, a hidden back pocket keeps your valuables out of sight. Lightweight and compact, the sling offers a 4.5L volume and comes in a choice of colorway and material options to suit your personal tastes.

This article was sponsored by Code of Bell