There are numerous bags in the world, but sometimes one comes along that makes an impression, a bag you simply have to have. Unfortunately, sometimes you have to let it go. Financial constraints, lack of space, scarcity of the bag itself, whatever the reasons may be, it’s just simply not to be. Fortunately for Alan Wenker, with the passing of time and the boom of the Internet, previously unobtainable packs were suddenly just a click or thrift store away. And so began in earnest the curation of a museum-worthy assortment of vintage packs that would make even the most serious of bag collectors proud… What was the very first piece in your collection? And do you remember where and why you picked it up?

I remember it well and still have the bag in my collection.  A blue, leather-bottomed Gerry daypack.  The pack is similar to the more popular Sierra Designs teardrop daypack, but the Gerry was a few dollars less at the time and money was very tight in those days.  I bought the pack around 1980 when I was in high school.  I used the pack during high school, through college, and took it to Europe a couple of times.  I grew up in a small town in central Minnesota (Lake Wobegon if you are a Prairie Home Companion fan) and bought the pack at a long since gone ski shop in St. Cloud, Minnesota.  I cannot remember the exact store name, might have been called North Star Ski Shop, but I do recall the street corner on which it was located.

When did you begin to feel more than what might be called an “average obsession” for bags?

At the point I could no longer walk through my gear room because the floor was covered by a massive pile of packs I began to think I may have a problem.  The hard part with collecting things is deciding what to keep and what to part with.  Not an easy task because many of the packs in my collection are unique to the era and to the companies who made them.  Many of the companies are now long gone or no longer resemble their former selves.

“At the point I could no longer walk through my gear room because the floor was covered by a massive pile of packs I began to think I may have a problem.”

I never had a particular drive to collect packs, for many years I had a daypack or two, an internal frame backpack and an external frame backpack and that was fine.  Then along came the Internet and eBay and suddenly there were countless vintage packs I always wanted to try, but were no longer made or the companies had long since disappeared.  At that point I got hooked.

The obvious question: why collect?

I collect backpacks from the 1970’s and early 1980’s.  Essentially I collect packs I wanted to own and use when I was younger but could not afford at that time.  Now I have a very large collection of vintage packs and I make an attempt to use a different backpack on each trip I take.  I am three years from being an empty nester and my free time for quick weekend trips will increase so I can see a day when I can get out more often and give each pack a proper field test.

What do you look for? What makes a bag a must-have?

Mostly I am after classic brands from the 1970’s and 1980’s. I want packs I can use on backpacking and winter camping trips.  There are far too many great packs to collect from that era and I find it very difficult to narrow down which specific packs I want to own.  If I find a knock-off of a Rivendell Jensen that is a must-have.  I have at least a half dozen or more copies of that pack.  I never cease to be amazed at how many companies made variations or outright copies of the Jensen.

“…many of the packs in my collection are unique to the era and to the companies who made them.  Many of the companies are now long gone or no longer resemble their former selves.“

At the moment I have all the packs I want or need.  I type that sentence and then I look at eBay and see a far too modestly priced Lowe Alpine Lhotse, a JanSport Alpine Phantom, and a Schonhofen backpack.  At some point I will have to pare down my collection, but I don’t know when that will happen or which packs will be the ones to go. 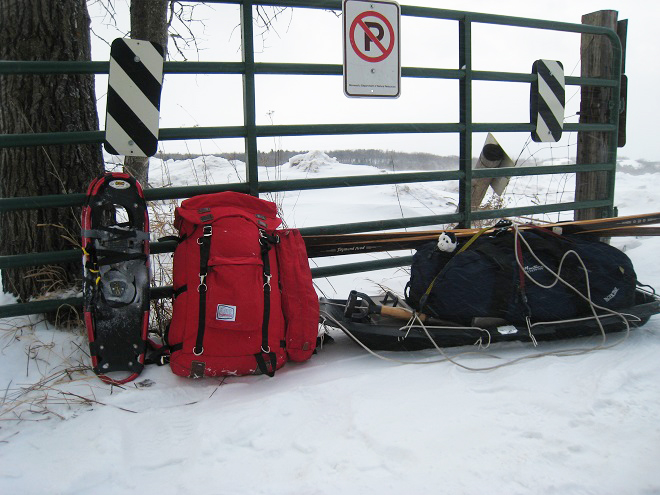 Do you have a certain fetish? A brand crush?

Rivendell Mountain Works with a bullet.  Back in the day I read all the original Backpacker magazines, of which I have since collected the first decade of back issues.  Backpacker did wonderful gear reviews at that time.  In Backpacker #5 they did a review of weekend packs.   The last sentence of the Jensen review reads; “This pack is a classic; we found it the most comfortable one we tested.”

That sentence stuck with me and I remained intrigued with the Jensen pack since.  By the time I could afford a Jensen the company was long gone. Then along came the Internet and I managed to track down Eric Hardee, this was before he started up Rivendell with a dedicated website.  I bought a Giant Jensen from him.  At the time he was making the packs on a word of mouth basis.  I have to admit, given the right-sized load for the pack, the Jensen carries remarkably well.  The design is pure genius, the perfect blend of form and function.

Between the modern Rivendell company and eBay I have nearly one of everything Rivendell made.  I need to order a NorthStar from Eric and that will complete my softpack collection from Rivendell.  Rivendell also made a packbag mounted to an external frame called the Fallen Arches.  I’d buy one in a heartbeat but the likelihood of ever finding one is small, I can’t imagine Rivendell made many of those.  At one point I had a Rivendell Bombshelter tent but I passed it along to a friend who lives in the mountains and may actually have a chance to use it in conditions for which it was designed. At the moment my Rivendell Cerro Torre is on loan to Eric for R&D in hopes of possibly making a modern version.

In second place would be Hine Snowbridge.  I always liked the no-frills designs of the HS packs and their packs are very well constructed.  By random Internet searching and dumb luck I stumbled upon the Hine brothers who owned the company.  They have been very gracious toward me over the years in terms of answering my endless questions about their packs. Was there anything from the past that you hesitated on that you would kill to have now?

I bought, and then resold, a JanSport Great Sack and every so often I wish I still had that pack; same with a JanSport Alpine Phantom.

How many bags do you have in your collection? Can you run us through an itemized list?

Digging through my pile took me a bit, bear with me, this may take a while.  Most of the packs below are internal frame packs or soft packs unless noted. Cooke Custom Sewing: four packs specifically designed for canoeing, these are all modern Sierra West: Ultralight overnight pack (can’t remember the name, back when they came out with a series of ultralite packs before ultralight was a thing)

I counted over 60 in that list, somewhat surprised it wasn’t a higher number. How do you store it all? And does your spouse understand, ha!

When we bought our house we were moving from a one-bedroom basement apartment to a four-bedroom, two-storey house with a full basement.  We lived in the basement apartment while my wife was in graduate school.  Needless to say our house was empty when we moved in.  One of the reasons I wanted this particular house was it had a storage room in the basement which I could claim for my gear room.  I knew that if I could keep my gear buried in that room my wife would better tolerate the mess.  Out of sight, out of mind.  22 years later it still works.

Can you tell us a favorite carry memory? Or a memory garnered whilst wearing a particular piece? You were wearing your ––––––– when this happened…

Perhaps my favorite carry memory is from my NOLS mountaineering trip in 1993. I had wanted to take a NOLS trip for a very long time and finally had the combination of available cash and time off of work.  My pack with all the climbing gear and food weighed 66 pounds.  In spite of the obscene weight I was surprised at how well the Lowe Expedition pack handled the weight.  I was quite impressed with the comfort (which at 66 pounds is relative) along with the pack’s stability. If your house was burning down and you only had enough time to grab one bag, which one would it be and why?

Paul Petzoldt Wilderness Equipment (PPWE) external frame pack.  The likelihood that I ever find another one is quite small.  Most everything else I own I could replace via eBay over time.  I’ve seen exactly one PPWE pack in 15 years of watching eBay.

I stopped actively looking for packs a few years ago, now I mostly stumble upon them from more casual web surfing, eBay and craigslist, or an occasional stroll through a thrift store.  I’ll eventually order a Rivendell NorthStar from Eric Hardee, probably later this year.

“I never cease to be amazed at how many companies made variations or outright copies of the Jensen.“ Lowe Alpine Systems made a pack called the Triolet which was basically a smaller version of the Lowe Alpine Expedition pack.  That would be fun to have for short trips.  Maybe a JanSport Alpine Phantom which was a marvel of engineering back in the day.  I’ve no real interest in modern packs.  There are plenty of wonderful modern packs on the market today but I have no need for one and it is simply quite fun for me to use vintage packs on backpacking trips.