I am not, and probably never will be, the greatest fan of sling bags as they usually wind up not working well for my specific needs. It’s not for a lack of trying, however. I estimate no less than two dozen slings have crossed my path in the past few years alone, and yet, here I am, about to review another sling bag. You might be wondering why I’m starting you off with this seemingly negative information, and how on earth this could be relevant to a review. Well, dear Carryologist, I’m here to talk to you today about the 1733 Side Pack, a larger sling that has been out for a few years now and almost always sells out instantly. I’ve been using one for the past six months and I think it’s time to talk about one of the first slings that I’ve actually enjoyed using. I guess that’s a bit of a spoiler, isn’t it?

Anyone looking for a moderately sized sling with a little organization that carries well no matter how you wear it. Also anyone into techwear is bound to appreciate the aesthetic.

If you need a lot of built-in organization in your sling, this will not satisfy you. Though it’s not “large” it can look and feel big on thinner frames. The Side Pack definitely has “fanny pack” vibes no matter which angle you look at it, but that has never once bothered me. I think the tapered wedge shape allows it to work really well as both a hip pack and cross-body (or on your back!). The VX07RS material gives it a distinctly tech look when the sun catches the x-ply and the exterior webbing and shock cord give the Side Pack a utilitarian-meets-outdoors aesthetic. As with all things, looks are going to be subjective, but I find the overall silhouette to be really pleasing, and I’ve received numerous compliments from strangers when using the Side Pack, for whatever that’s worth to you. While the Side Pack is a regularly released offering from 1733, its sheer popularity prompted the company to partner with trusted manufacturers and this particular run was produced by International Stitch Tech in Hollywood rather than in-house at 1733. While that may seem like a negative, I assure you it isn’t. I’ve encountered precisely zero construction issues in the six months I’ve been using this sling (as of this writing) and I have not been gentle with it. It’s been a daily carry, a dad fanny, a camera cube, stuffed inside other bags for travel, worn on my hip as a cycling pack, and just generally thrashed about; it has held up and I presume it will continue to do so. 1733 doesn’t explicitly state a warranty on their website but they do say “We stand behind all of our products. If you experience any failures or defects please contact us and we will make it right.” So while it’s likely up to their discretion, I feel confident that if something were to actually fail on this bag, they’d be able to fix it.

This version of the Side Pack was released in VX07RS from Dimension Polyant, which initially had me worried as to the longevity of the bag with such a lightweight material. I’m accustomed to seeing VX07 as a liner, but this is a slightly more robust variant as its face fabric is ripstop nylon. So the combination of light weight and high tear resistance is actually quite perfect for a small sling like this. With time and extensive use my initial fears have proven to be totally unfounded as the material, despite only having a 70D face fabric, has shown no signs of degradation and is only just now developing some wrinkles from repeated use. 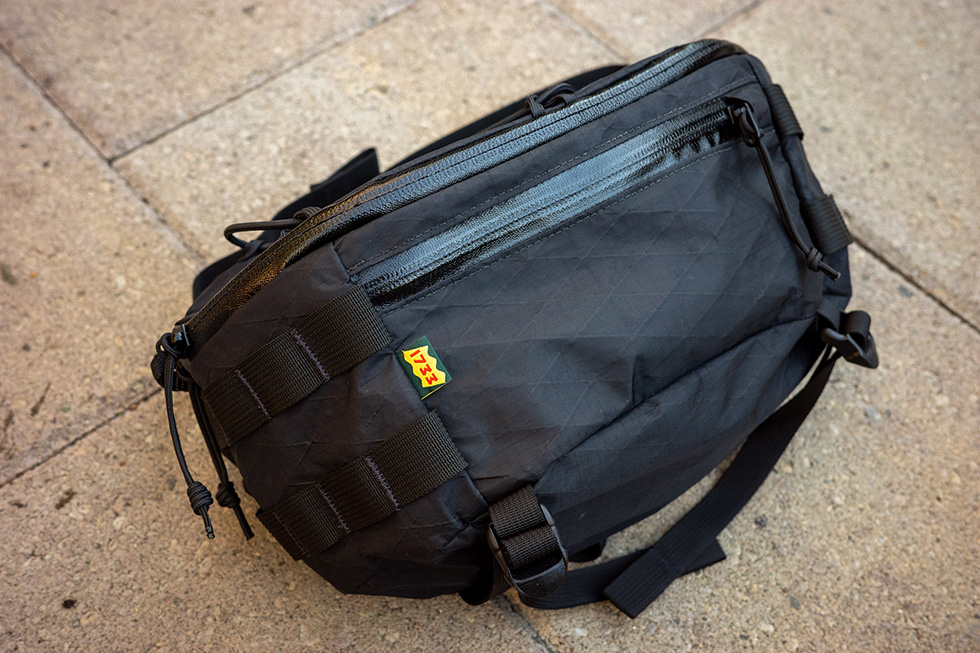 The two exterior zippers are both the YKK AquaGuard variety so they do have some resistance to them, but they are of a consistent quality one would expect from that brand. I’d also like to point out that all exterior webbing (including the strap) feels good and sturdy to use, a small but important detail. The relatively simple design of the Side Pack means that it’s pretty light on “features”. There are a couple of things I would like to have seen, but realistically what is provided to you does work well (with one exception). Starting with the smaller front pocket, it really is just an open space. This is where I like to drop my keys and perhaps my chapstick if I’m carrying it. I will say that I do wish there was a key leash in this space, but I can live without it. The exterior has a couple of additional features to mention as well. The top panel has small loops sewn in and includes some shock cord which allows you to quickly secure an item. The bottom of the sling has two lash straps that serve as an additional storage point as well as compression straps to cinch down the bag if you have it underloaded. Lastly, both sides of the bag feature PALS webbing, which would technically allow you to attach something. I found it most appropriate for clipping carabiners or other small items for temporary attachment, but you’re free to do as you see fit! There is a nice grab handle on top which is one of those little details that you just really appreciate when you need it and another neat feature is that the waist belt can be completely stowed if desired. I found this to be another “nice to have” feature, particularly when I would pack the Side Pack inside of another bag for travel purposes. Finally, we should talk about the main cavity as that is the primary function of the bag. Well, it’s an open space, that about sums it up. You can pack it how you see fit. Pouches can prove to be useful but I often found that the handful of items I would keep inside were bulky enough to be able to just sit loosely inside the bag. The interior organization is minimal. The two pockets serve to hold things like a phone, wallet, or even a compact camera if you have one, and there are three pen slots available as well. I would have preferred if that was a third pocket which would allow me to hold something wider like a pocket knife or even hand sanitizer. Overall though, it’s an open space for you to organize as you see fit, or don’t! It’s not such a large space that you can’t just drop your stuff in and go.

The Side Pack comes in at 7L capacity and essentially all of that is in the main compartment, which makes sense for a sling. This will be the primary space you work out of with this bag as the only other pocket is just a slim one ideal for keys or perhaps your phone if you desire. Access to this space is super simple as the compartment features dual zipper sliders so you can orient it on either side, which allows you to also easily wear the bag across either shoulder and not impede access. Considering how incredibly lightweight this bag is and how relatively small it is, it doesn’t require a lot of padding since you’re not going to have a ton of things in there. The back panel is lightly padded enough to keep anything in the bag from jabbing into you but the rest of the bag itself is unpadded. The strap is also unpadded, but again the size and weight of the bag means this is totally fine. Additionally, I would like to say that for once I’ve found a sling that actually fits my broad chest and shoulders, this is something I am rarely able to find! I love that you can also very easily wear this across either shoulder and have it work equally well in either direction and I found that it sits well on the body no matter which orientation you choose. The VX07RS is DWR coated and will be fairly resistant to water seeping through. When combined with the YKK AquaGuard zippers, the only parts of the pack that would likely get wet will be the strap and the back panel. Neither of these will impact the overall dryness of the pack’s interior and your contents within. In my travels with the bag, I’ve been caught in light rain a couple of times, but nothing too serious. The exterior fabric got wet, but the inside stayed completely dry, which let me feel confident that my things were safe inside.

I opened this review stating that in a general sense, slings didn’t work for me. And yet here we are at the end and if you’ve read this far you’ve gathered that I quite enjoyed my time with the 1733 Side Pack and I found it to be a very useful addition to my daily carry. It’s a flexible size, comfortable to wear, looks awesome, and has held up very well to extensive use over a period of several months. It could use some better organization but overall it did very little to disappoint or irritate me. So with that, I can happily say that I have found a sling that brings me joy and it’s one that I feel confident in recommending to others.