An ode to a legendary carry icon. Built to be used anywhere, at any time.

A homage to the IKEA Frakta, but even stronger and definitely bolder.

In a one-time-only, limited-edition release. 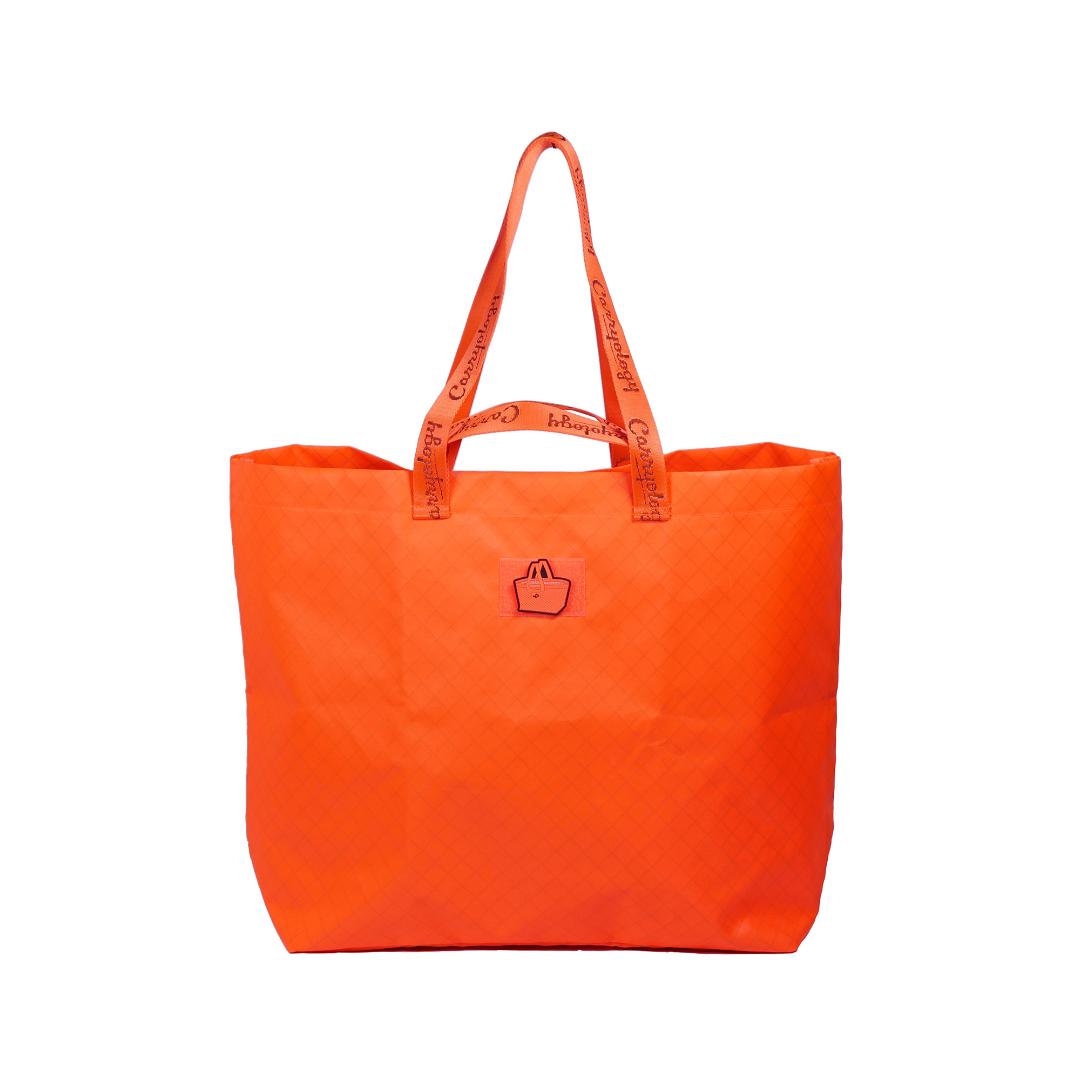 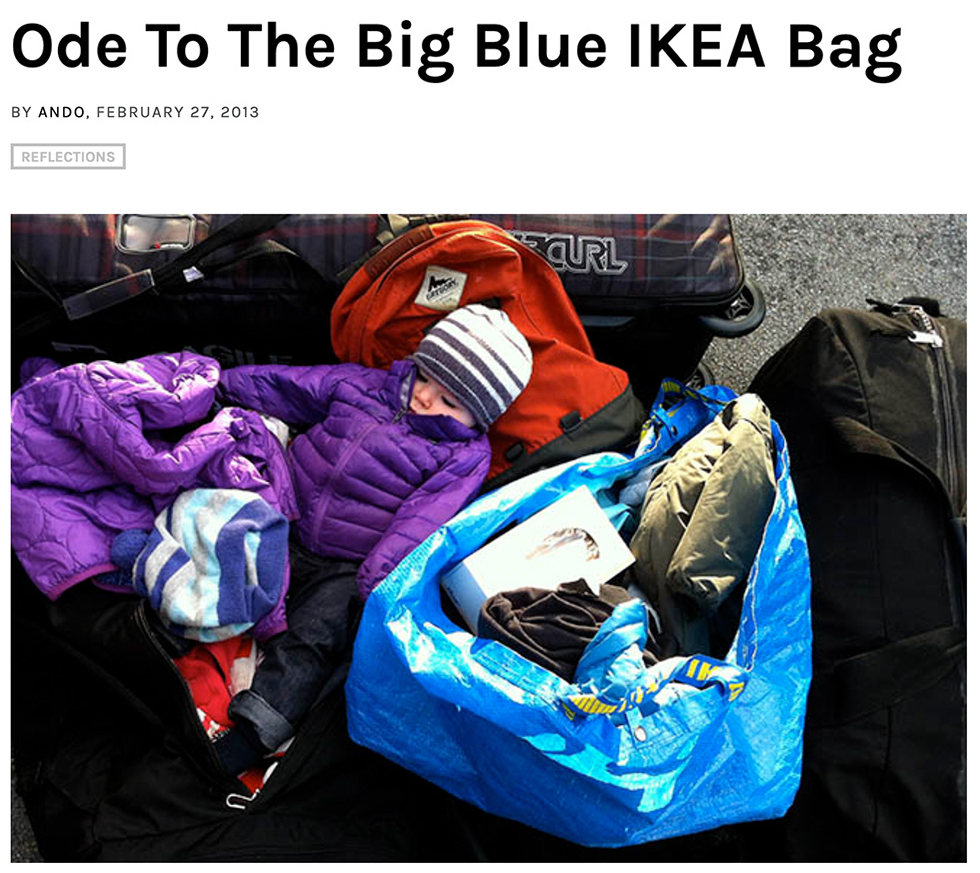 We’ve been writing about this icon of carry since 2010. We’ve been fans of it for even longer than that. Andy Fallshaw (Carryology co-founder), has even published a love poem about the Swedish hauler, titled “Ode To The Big Blue IKEA Bag”. Yes, a love poem. We even awarded it the “Hall Of Fame” winner for this year’s Carry Awards.

We love this bag.

And for good reason.

Tracing its original concept story back to the 1960s, this nearly 40-year-old product was born as a direct result from a process in design thinking and research, which is some high-level nerding that we appreciate.

Hundreds of millions of them have been produced since then, all thanks to the two fathers of big blue, Ingvar Kamprad (IKEA founder) and Sten Lundén. This bag is always there when you need it. For any purpose. It’s packable, so you can use it as a backup travel tote for souvenir overflow, tucked away in your one-bag travel backpack. It’s a gardening bag. It’s for depositing one million dollars in cash at your local bank. It’s camping gear storage. It’s a grocery hauler. It’s there when you’re ready to move into your next home or apartment. It’s famous for being able to carry 50 kilograms, “We found a woman at the office who weighed about 50 kilos and asked her to stand in the bag. I took one handle and Ingvar took the other. We lifted the bag up, and it didn’t break!”

It’s bold. It’s utilitarian. It’s so simple that you truly forget about it. It’s minimal. It’s maximal. It’s badass. Folks on our Carryology team and our Carryology community members literally jokingly brag about how many Fraktas they own in their collection. It is the most punk rock bag in existence. For all the reasons above, as the world’s self-proclaimed number one fans of the icon, we wanted to create our own ode to the legend. Except this time, it's an ode that exists in the physical world, a product and not just a love poem. But maybe a little bit of both.

Inspired by everything that makes the humble big blue bag great… and then cranking the knob up to 11 at CBGB on a Saturday night. 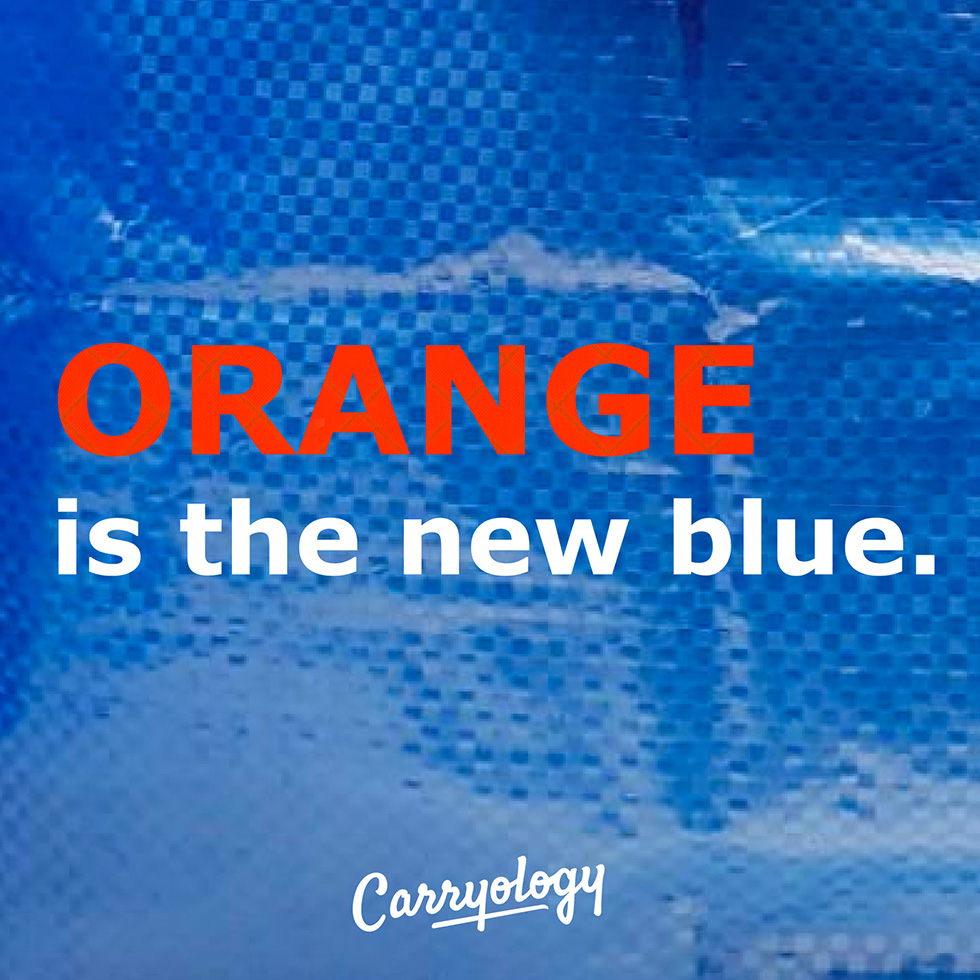 First, fabric. While we love the instantly-recognizable blue polypropylene fabric of the original (commonly used on rice bags)… that just wouldn’t do. We made a list of properties we must have. Whatever we chose had to outperform the original stuff in every category. Durability, strength, water resistance, and color. We called up our friends at Challenge Sailcloth and made our wild pitch. While they had literally thousands of fabrics to choose from… there just wasn’t something that was perfect for this particular project. One option was 90% there, another fabric was 95% spot-on, and another was only halfway there, but it had properties we really wanted to include. So we popped the question… could they laminate us our very own custom fabric for this? Without hesitation, Hale at Challenge Sailcloth replied, “Absolutely!” The original big blue is bright and bold. And we couldn’t make an ode to the original without stepping up the brightness and boldness factors. So it's blaze orange, of course. Because “orange is the new blue”. We commissioned their first run of EPX400 fabric in this eye-piercingly bold colorway, Bright Orange. And this fabric’s performance… it’s the bee’s knees.

The 400D face fabric is made from 100% recycled polyester, which has twice the abrasion resistance of 420D nylon. Then, it’s laminated to a 70D ripstop backing fabric, with a matrix of 45° CrossPly in between for ultimate strength. Remember that 50kg human test from above? We’ll get back to that later. Finally, there’s a C0 DWR (durable water repellent) finish applied to the face, for those perfect sexy water droplet beads we all love to see. This ultimate performance sandwich creates a truly waterproof fabric (200PSI, 13.8+ Bar) that is wildly strong and can take many years of brutal abuse (3,000 cycles ATSM 3884)… and it’ll look great while doing it. 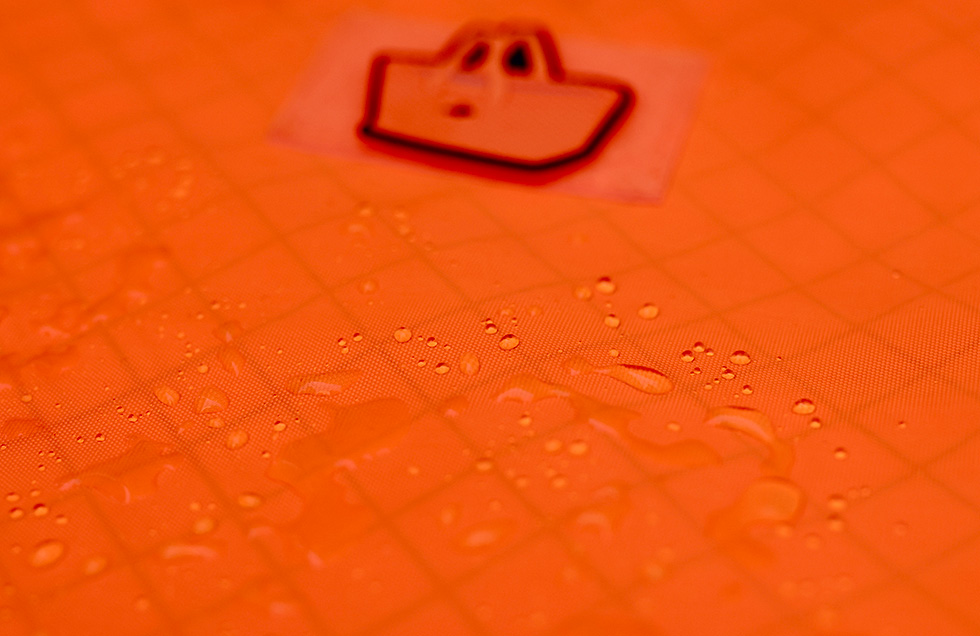 Next up, the handles. These were critical to the success of the project. Solid color webbing without the wordmark would just look lazy. And folks, let me tell you… I’ve been designing and manufacturing bags for 15 years now… and sourcing this custom webbing was a serious chore. Searching the ends of the supply chains, we finally found the single best webbing supplier in the world. And somehow, we convinced them to take on this custom project. After six months of back and forth sampling and dialing of just the webbing, we had our final golden sample. The custom Pantone color-matched Carryology webbing finally exists. Since so many of us all love our morale patches, we opted to toss on a small Velcro loop field to accommodate. Of course, this Velcro was also custom Pantone color-matched to the fabric, so there aren't three shades of oranges clashing with one another. But we couldn’t just make a Velcro loop panel and not include our own morale patch.

Since the entire project is a bit tongue in cheek, the patch had to meet the same style. Personally, this is one of my top three favorite patches we’ve ever made. Inspired by the movie Inception… the bag’s patch would be… a patch of itself. A bag on a bag. Molded rubber for detail and bold colors. Everyone who has seen it so far declares their love for it or laughs uncontrollably. Success. We made exactly enough patches so each Fraktaologi (both sizes) comes with its own patch. The patch will not be sold separately. High-Quality Construction for a Hard-Working Hauler

Arguably the most important piece to the puzzle… how do we make this thing? We wanted the highest quality sewing and construction possible, but we didn’t want these things to cost $300+. If we went cheap, it would feel cheap. If we went domestic, it would be impossibly expensive. Who could deliver on both of these? The hero himself, Mr. Helmie Ashiblie of Alpha One Niner (badass people, badass brand, badass products, Carry Awards 1st place winner, and partners for the Carryology collab “Stealth Cobra”). In this world of softgoods manufacturing, this is a man who has a proven track record of delivering some of the highest quality products on the market. Helmie stepped in and offered up his manufacturing services for this project. And we couldn’t be happier about that. All the pieces were on the board. Since we got this far, in the 11th hour, one of our team members brought up a valid question. Even though we knew the answer to it already. Should we make the OG size of 19 gallons? Or the more travel/EDC-friendly size of 10 gallons? Cue the “why not both?” GIF meme.

The Medium can hold approximately 1,300 meatballs.

The Large can hold approximately 2,500 meatballs. 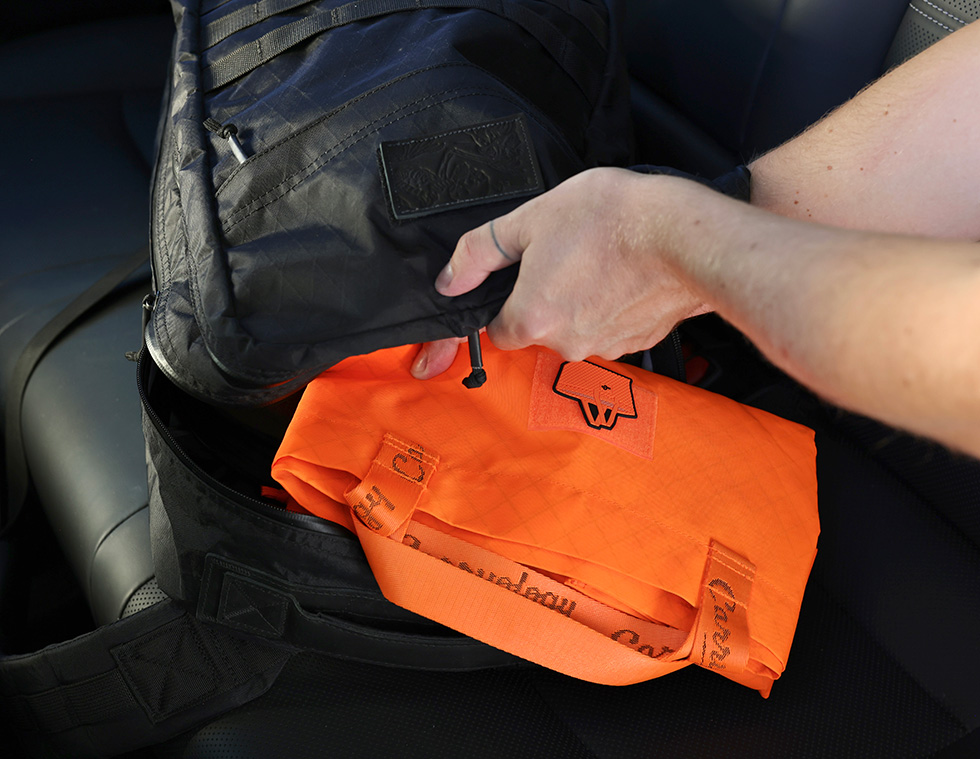 The final step, we realized, hadn’t been finished yet … it needed a name. We kicked around some silly ideas. And yes, this was a silly idea turned serious, but it’s definitely not a joke. So we needed something that paid proper homage and respect to the original. At my wit’s end, I thought… I know IKEA uses Swedish names for many of their products, let’s see what “frakta” means. Well, “frakta” is Swedish for “carry”. It was that moment I had it, like every lightbulb in an IKEA store’s lighting section lit up all at once. Pulling up another browser window… yep, “Ologi” is Swedish for “The study of”. 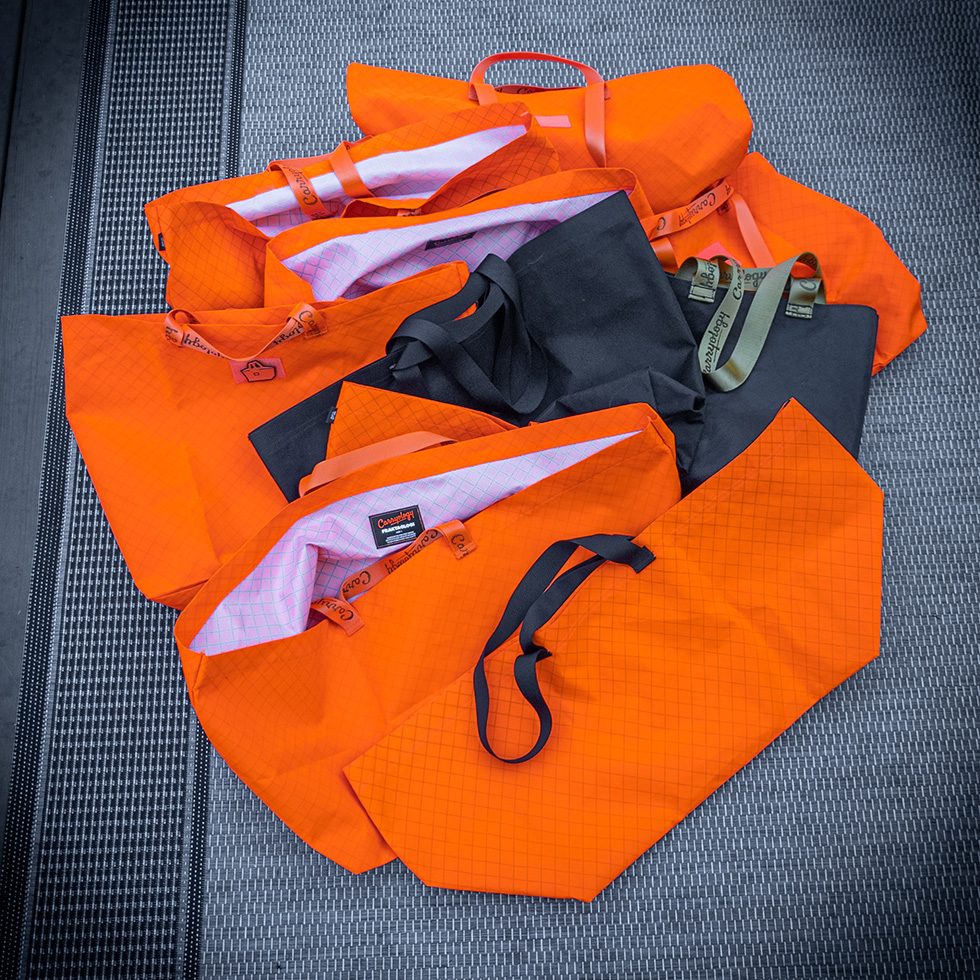 One massive shoutout to our Senior Editor, Brandon Vulaj. Once the design concept was finalized, Brandon stepped into the critical role of Product Developer for this project. Simply put, this wouldn’t have been possible without all his efforts. This might seem like a “turn-key” project that just took one or two emails to complete. But behind the scenes, Brandon has been chasing down suppliers, dealing with the world’s unstable supply chain challenges, working on pricing and manufacturing issues, and approving over a dozen different samples over 16 months’ time. These projects are no walk in the park and this one was no different. Worth it? Absolutely. Finally, remember that story up above about the original blue bag being able to hold a 50-kilogram human without breaking? Well, we found two women who agreed to test the limits of the Fraktaologi. The test required both women to stand in the bag, at the same time. Total weight is a combined total of just over 100+ kilograms (220+ lbs).

My friend and I lifted them up off the ground with opposite side grab handles and the Fraktaologi brushed off the test like it was child’s play. Not one single stitch broke. Designed by Carryology, made by Alpha One Niner, from Challenge Sailcloth EXP400. It’s the do-everything anywhere bag. Packable travel tote, grocery hauler, cash bag for making large deposits, camping gear storage, a porter for whatever you can think of. Keep one in your car door pocket, one under the sink, and one in the hallway closet. You’ll end up using it way more than you ever expected. The Fraktaologi. A modernized and updated ode to the icon of carry, the Carry Awards Hall of Fame winner, and the most punk rock bag in existence. 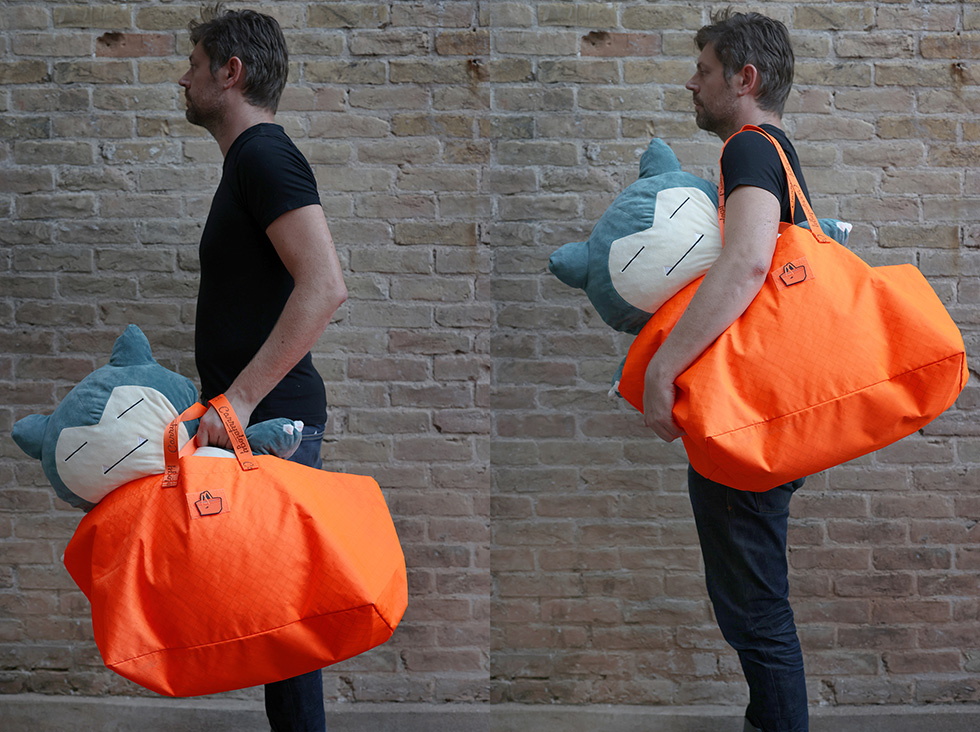 One thought on “Exclusive Release | Fraktaologi”