Bedouin x Carryology | The Bounty of the Sharky

The third piece to our ongoing collaborations with London-based Bedouin Foundry, the Balian and KHAN are joined by the scallywag Sharky. Inspired by a historic fiery corsair of the sea. A bag designed and developed from the ground up, sized for everyday essentials, and geared with modern access and expandability, so it can carry wherever your adventures take you.

I love writing about Bedouin’s products, the brand itself, its owner (and my friend) Silas, the quality, the beautiful artisanal manufacturing, and its unique place in the carry spectrum. There is no denying that Bedouin is one of my favorite carry brands in the world. I’d go as far as to say they’re one of my favorite brands in the world… for anything. Which is exactly why we’ve done two previous collaboration projects with them (Balian and KHAN). Both a huge success, the KHAN getting snagged up in less than 60 seconds.

A third project – to complete the set

Once the madness from the KHAN subsided and breathing returned to a slightly normal pace, Silas got on a call to chat. We both had more ideas that needed to be brought into the world together. We discussed the possibility of a modified Barbarossa, which we both loved. But it felt a bit too similar to the KHAN, both being single-strap shoulder bags. Maybe we could figure out how to do a fun twist on the new luggage piece, the Mamluke. Ultimately, we ended the call with more questions than answers, unsure of what direction to take.

Then, it was so obvious. Stepping back and looking at the previous two, a sling and a messenger, the third form factor spoke for itself. It would complete the trinity of the carry quiver. To fill the void, it would be: a backpack. Something compact and luxe and new.

There are a lot of backpacks out there and lots of really beautiful designs. But very few shapes and styles could be adopted and create a “Bedouin” backpack. Where the DNA and aesthetic lines really shine for Bedouin, as in their messenger bags.

A backpack – built from the ground up We decided to make something brand new, not a riff of an existing product from their collection. Created from a blank slate, inspired by what we really love about Bedouin and their iconic messenger bag styling. We’d take these elements and apply them to a backpack. The unique and iconic bridle leather veg-tanned arrow-shaped flap with two Austrian-made Cobra buckles. The simple and large mouth opening. Toss on some shoulder straps and call it a day. Well, not quite that simple. Down the path of lots of design refinements, improvements, and hand-cut patterns.

After we were properly excited about the final refined design, Silas sketched up some new ideas and we had his artisan factory in the southwest of England handmake a prototype. Upon our review, we realized that we were getting close, but it was too strappy, too Gorby-gappy, and the shoulder straps needed some serious love. I went over to the Bedouin x Carryology KHAN I had in my collection to think on how to make some strap improvements… and that’s when the lightbulb lit up and exploded. If the Genghis/KHAN had one of my favorite messenger bag straps ever… then why not apply their build quality to a backpack harness? Proper, heavily padded, leather-backed shoulder straps. We were getting there. A few prototypes, some more testing, feature adds, and refinements later; the backpack was in its final form. 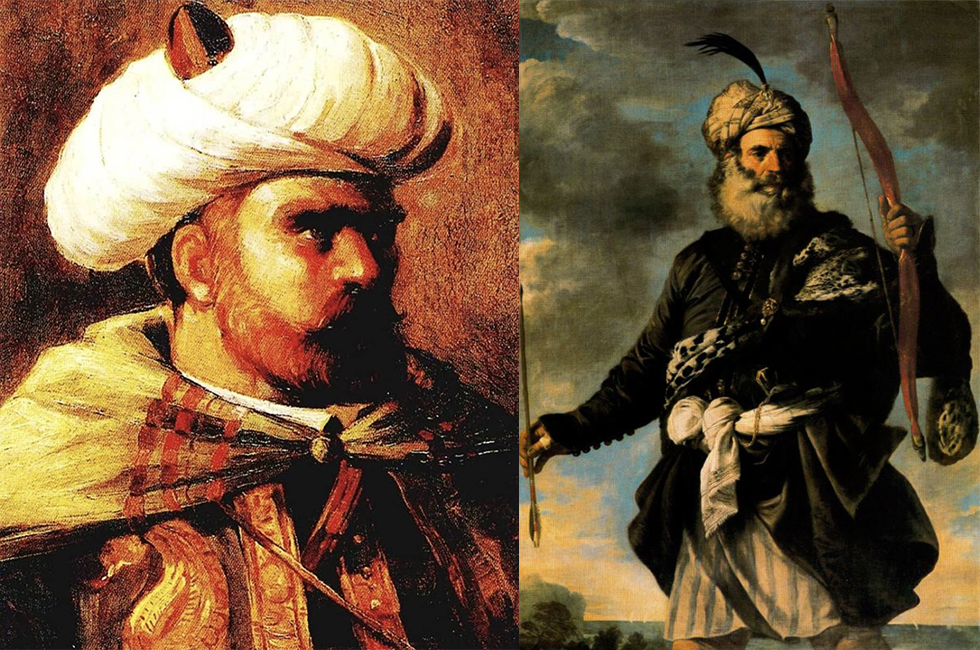 As you know, we always come up with a project name when working on these collaborations. Balian and KHAN both were a nod to Bedouin’s products and brand in one abstract form or another. To keep that going, we went with something taken from the age of the buccaneer (like the Barbary, Barbarossa, and Pequod). Several famous pirates were considered.

However, Silas had an affinity for Captain Jack Ward (AKA John Ward AKA Yusuf Raïs AKA “Birdy” AKA “Sharky”), a fierce Barbary Corsair. I did a bit of research on this pirate madman named Sharky to see if he was as impressive as Silas suggested. After a couple of days of being astounded with everything I read of this maniac pirate legend, it was this paragraph that sealed the deal:

“As a man, Captain Jack Ward was short, stocky, gray-haired, balding, swarthy, heavily-bearded, and utterly fearless. He led battles from the front, charged enemy decks armed with a fucking battle-axe and a brace of flintlock pistols, and never backed down from the opportunity to administer an asskicking.”

Sharky it would be.

Dyneema in all three

As part of being the world’s biggest carry nerds, being massive materials nerds comes with the territory. So selecting fabrics for the Sharky are no less important than the design itself. However, since we would be adding the third piece to the three-piece Bedouin x Carryology collab collection, the choice was easy. DSM Dyneema fabric, the strongest man-made fabric on earth, specifically the 102gsm Dyneema Composite Fabric CT5K (black). It’s waterproof, it’s beautiful, it’s high tech, and it’s awesome. And of course, like the metaphor of the Bedouin tent used on all of the other Bedouin products and collaborations we’ve done, we had to go with the heavy-duty cotton drill custom hand-printed in the UK, orange geometric crank liner designed by Zeke Wade. The same stuff we used in the Balian collab. It’s pure cold darkness outside until you step inside the luxurious Bedouin tent to seek a few moments of warm shelter. Luxe at every touchpoint

All black everything on the exterior, including the leather. The front flap uses 3.5mm thick bridle leather which has a nice hefty feel and weight. But we didn’t want to stop there. We looked back at the Balian and the KHAN and combined the best of both worlds. For the Sharky, the entire full-length backpanel, the bottom base, and the inner shoulder straps… would all be buttery soft pebbled Italian leather. Pure luxe at every interaction point. And to get inside of the bag? A Carryology favorite and hardware that Silas has been using since day one, two 25mm Austrian-made Cobra buckles. Super sexy, super functional, and quick to access the main compartment. Not skimping out, even the two shoulder strap utilize two AustriAlpin Cobra Frame tri-glides for adjustment of the 25mm seatbelt webbing.

Not that you will even encounter a situation that will test these hardware bits to their maximum, but we wanted to share the wildly impressive specs on them anyway, because awesome. The Cobra Buckles and the Cobra Frames both have a break strength of 18 kN (for those non-physicists reading, that translates to 4,047 lbs force... for each unit!). Expandability when you need it

We all know that sometimes we need to pack more or less, and a pack that adjusts to our needs is a big win. So the 25mm seatbelt webbing on the Cobras has enough extra length so you can shove in large and oddly-sized objects and extend the flap upward, gaining additional volume when you need it and a clean and cinched-down silhouette when you don’t.

Pack size is approximately 24-26 liters, perfect for everyday or light travel. Then, it has the ability to gain approximately an additional 4-10 liters, depending on how you load it out. From EDC pack to travel pack, with just a quick adjustment of webbing. Here’s the thing… packs with an opening at the top might look great, but they’re difficult to get down into. It was only after the first sketches that we decided to add two water-resistant vertical zippers down the front. This way, you can access the inside of the pack while the Cobras are closed. And you can fully open the front panel, like a clamshell. Access everywhere. We wanted this pack to be super clean and have classic, timeless lines, but to be a hauler too, with hidden organization for all the little bits, to achieve that form and function balance. On the outside, there are two discreet small pockets on the lower sides. Just big enough for an EDC item with a pocket clip or shoving in a boarding pass as you make it through security. Under the front flap, the two iconic cross drop pockets, one zippered and one quick access. Each drops down the full length of the front panel so they’re legitimately useful. On the inner panel, a zippered accessory pocket for sensitive items like a pair of sunglasses or headphones. On the rear wall we added a suspended laptop sleeve which easily swallows up the latest thick 16″ MacBook Pro. And as a clever addition, there’s a second "hidden" pocket built into that sleeve, perfect for flat items in front of the laptop. Each one of the Sharky backpacks is handmade by skilled craftsmen and craftswomen in a small artisan shop, located in the countryside southwest England. Silas, the sole individual who founded and operates Bedouin, has trusted these individuals to bring his visions to life for many years. Due to this fact, there are a small amount of these being produced. If we could have doubled the order, we would have. Even if we could have added 10 more units to this order, we would have. These artisans are proudly doing things the old way, which limits output, but ensures the highest quality products possible. A boost of morale

Just like the KHAN, we wanted to include a little something extra for this. We hadn’t created a Bedouin x Carryology morale patch yet. But, there wasn’t any Velcro on the Sharky for a morale patch. So we made a patch anyway and figured we’d let you decide how you want to display it. Inspired by the wave pattern and sea creatures that came from the imagination of sailors like Sharky and his crew. Made in Wales, United Kingdom. The 'Exclusive Release Article' will be published to Carryology.com, and will include the shop link to purchase.

NOTE: The product page on Bedouin's website will be Password Protected.
The only way to get the Password will be in the 'Exclusive Release Article' published here on Carryology.com.

We suspect these will go quickly, so act fast.

This is a one-time-only release, in limited edition.

Once they're sold out, they're gone forever. Fraktaologi | The Most Punk Rock Bag in Existence

Prometheus Design Werx Stratus Down Hoodie Review
Apple iPad Pro | Is This the Perfect Mobile Studio for Travel and Adventure?

One thought on “Bedouin x Carryology | The Bounty of the Sharky”